Just realised that I never posted my October finish for the Black Cat theme - silly, silly me!

Here goes, another PS design, of course (because it was stitched whilst travelling). 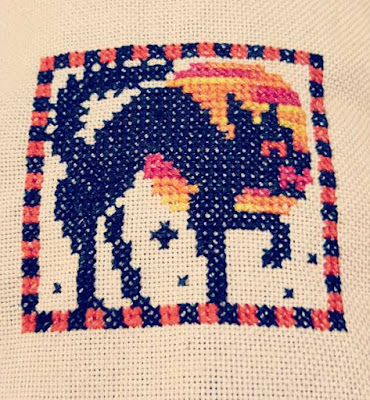 Yay!  I have finished the Hallowe'en Ornie SAL for 2016 early! 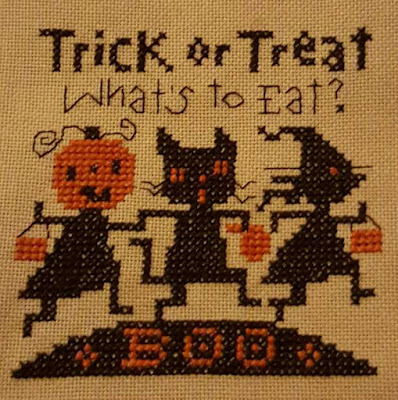 This was an absolute dream to stitch, I started it on Friday and finished it just before midnight on Saturday night.  So, a very quick stitch for me.

I am so looking forward to next year's themes, I can't wait to get started!

Thank you to everyone who responded to the email asking for suggestions for next year's themes.

A particular Thank You to Jacquie who would like Pumpkins every month.  So if you want, you can add a pumpkin to any of the themes shown below!

I hope you like these themes, there are some old favourites and a couple of new ones too.  I'm certainly looking forward to seeing what everyone stitches up for us next year.

Here is my Ghastly, Ghostly Ghouls all framed up: 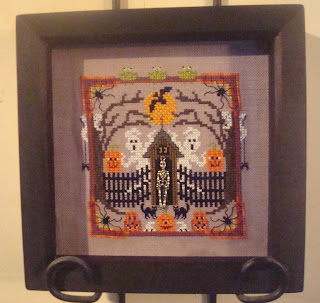 There are at least 9 themes covered in that design!

And here are the trio of frames for November:

Email ThisBlogThis!Share to TwitterShare to FacebookShare to Pinterest
Labels: 2017 Themes

Dont' worry, not mine but my poor Prairie Schooler Skeleton! 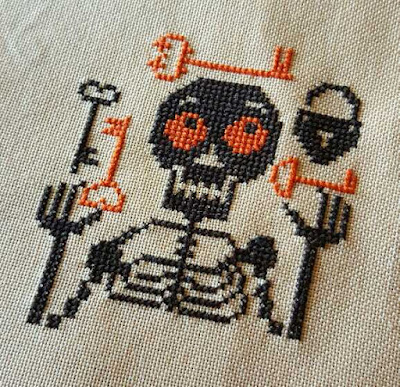 See his right shoulder (on the left)?  Well, it should be sitting at the same level as the other shoulder but I didn't notice the discrepancy until after I had stitched all of his arm and the two keys.  At first I thought to myself, 'oh no! All that frogging!' But then the more I looked at it, the more I quite liked my unintentional change to the design and I have decided that the poor skeleton has a dislocated shoulder - poor lamb!

I present to you Witchy Remedy by Silver Creek Samplers from JCS Halloween Ornie Mag 2011.

This was my piece for the April 2013 theme on the earlier incarnation of this Hallowe'en Ornie SAL blog - finally finished!  Only Three and a half years late! lol! 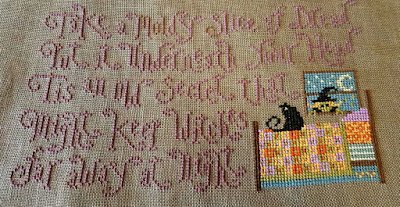 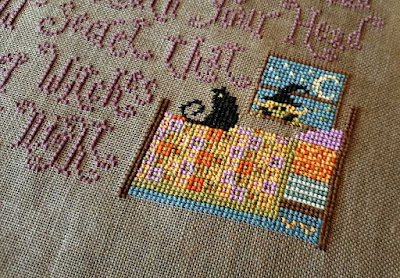 Look carefully, at the last pic, can you see the mistake I made, again?  Another one that I intend to keep, as it sort of fits in with the theme of the piece.

So, that is all for me for now,

Continuing with October's design for Black Cats I have a finish for this month's Skeleton theme: 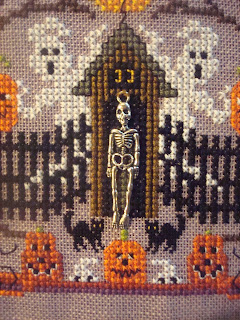 And here is the whole thing: 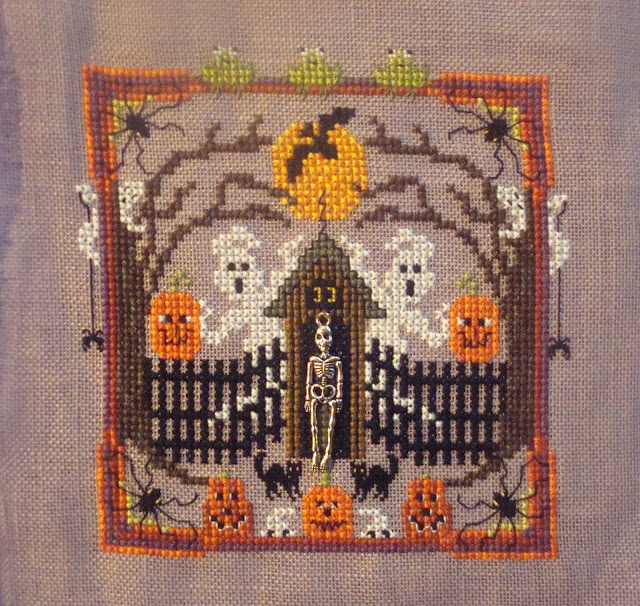 The design is Ghastly, Ghostly Ghouls by Just Nan, just one of my large collection of Spooky JN designs.  It will fit perfectly into a 6x6 box frame.

Those three little frogs along the top definitely brought their friends!  I frogged and stitched that top border three times and the two gourds at the bottom, trying to get the right dark orange.

Posted by Jo who can't think of a clever nickname 3 comments:

Better late than never!  I started this design at the very beginning of October because it had two black cats in it.  Unfortunately it took a little longer to stitch than I thought!

Here's the portion with the black cats: 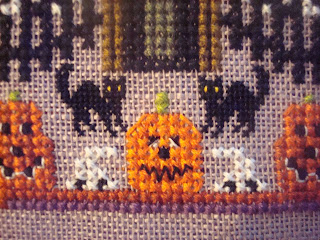 stitched on 28 count lilac linen.
The cats are stitched over one.

If you want to see the rest of the design and find out what it is called, you'll have to look at my November post!

Posted by Jo who can't think of a clever nickname 4 comments:

Well I had such great intentions at the start of the year, until I started a HAED challenge and got addicted and that's all I wanted to stitch for a while ... then work was mental busy and I was barely stitching at all. Anyway it was always my intention to work a bigger piece this year instead of doing all ornaments and a few weeks ago I decided 'what the heck' I still want to do it. So here is my year to date, primarily working on Halloween Markings by Heart in Hand.  I stitched everything in order of the monthly SAL themes :) 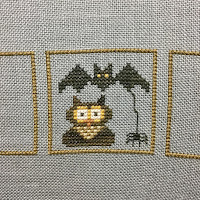 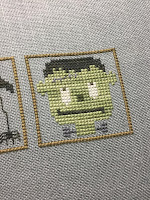 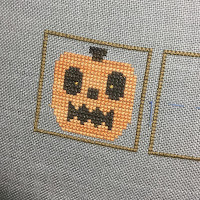 April - Ghosts - it't teeny, tiny, and hiding behind a tree, but there is a ghost in there ;) 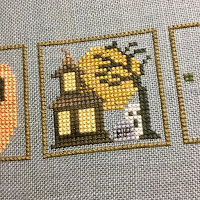 May - Spiders - a freebie by Lizzie*Kate (then I realised after I'd stitched it that I'd stitched the exact same design last year - doh!!) 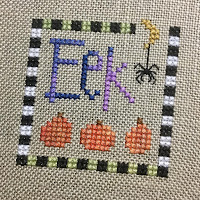 August - Spooky words - unfortunately I can't find the photo I took with the words completed, but without the black cat block stitched :(

September - Bad fairies - no idea what to stitch for this one, so it was a bit of a fail ...

October - Black cats - and this saw the end of Halloween Markings, with all the blocks and border completed, just in time for Halloween itself 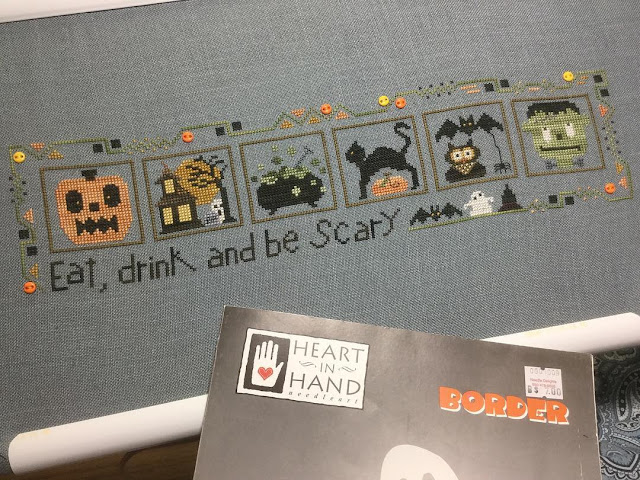 November - Skeletons and Skulls - Halloween Ornament 4 by The Floss Box (the skulls are hiding at the bottom), I just love their Halloween designs, they use lovely and bright colours (and great to see DMC as the threads of choice instead of overdyeds, as much as I love the look of overdyeds) 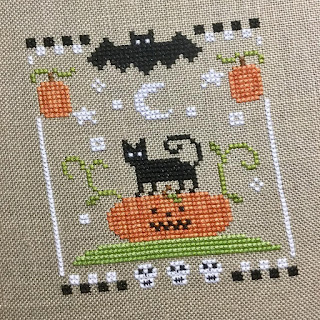 So, just December left to go now - hopefully next year I'll be able to keep up and keep on track ... although if I can I'm going to continue doing a larger project with multiple elements present, it's great to see some of the bigger projects get stitched up gradually bit by bit.

O is for Occult, Ouija and Owls

When we first started this blog I made a series of posts beginning with each letter of the alphabet starting with A.  Unfortunately, they ground to a halt after L.  So in honour of The Alphabet Club hosted by Chiara I have decided to continue the posts and link up each month with the rest of the Alphabet Club posters.  To learn more about this SAL follow the Alphabet Club link to Chiara's blog. 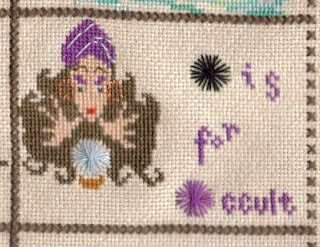 O is for Occult from A Dark Alphabet designed by Julie and Becky's Note of Friendship blog.  Those are Octagon stitches there.

The word "occult" comes from the Latin occultus meaning hidden or secret.  It generally refers to anything mythical, supernatural, magical or having those powers.  Most of the designs chosen for this blog could come under the heading "occult".  I thought I'd look at some occult symbols for this post.

Baphomet is a goat-headed idol used to denote evil in many sources from the Knights Templar to modern Death Metal. 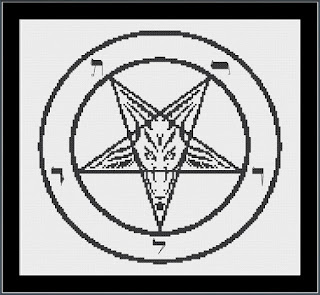 The all-seeing eye and hand is often used as a symbol of an omniscient presence watching over us.  But is it good or evil?  There is a lot of information online about the Illuminati and their use of the symbol. 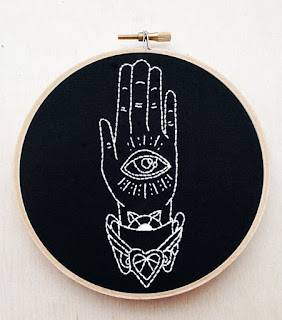 All Seeing Eye Hand by Cardinal and Fitz

Here's a fun one of a witch using her crystal ball: 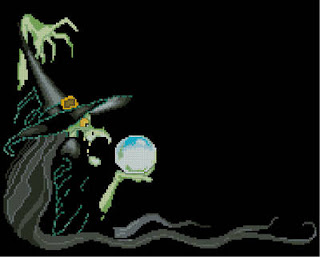 The ouija board is supposed to be used to communicate with those who have passed over.  It's a staple ingredient for teenage parties where someone always makes the glass move to scare everyone else! 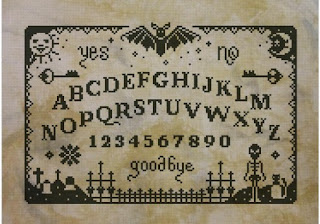 Primitive Ouija Board by Clouds Factory 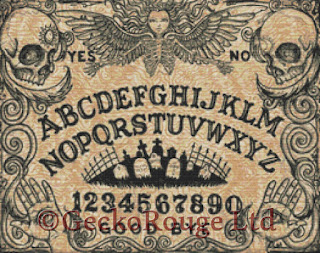 Ouija Board by Gecko Rouge

Our final O is a very popular topic here on the Hallowe'en Ornament Blog.  Here are a few of mine: 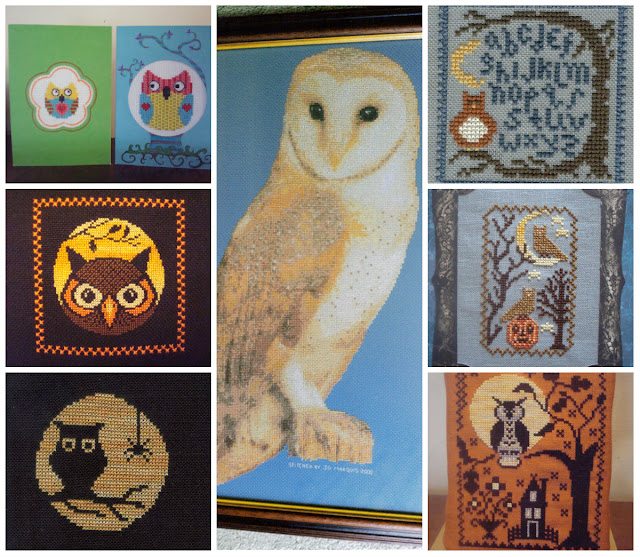 And a bonus choice - O is for Orange, a great colour for a fabric, especially for Hallowe'en designs: 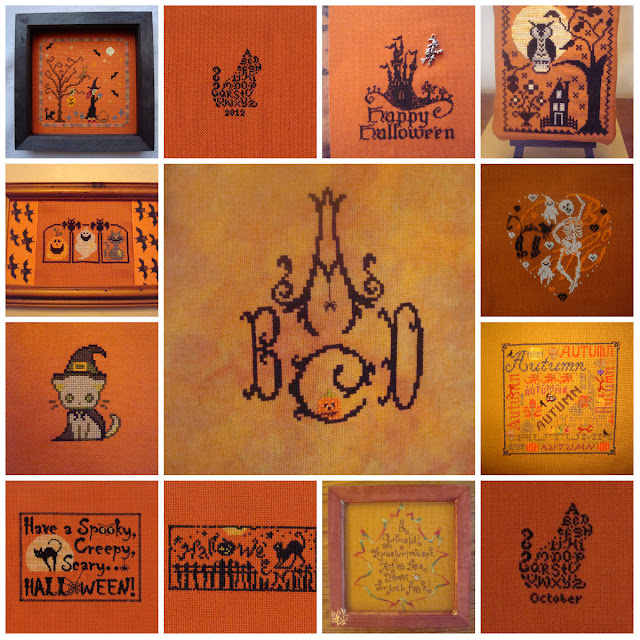 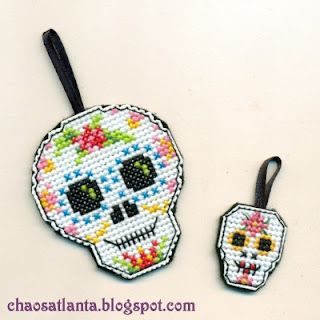 I stitched up these cute sugar skulls from a free pattern found here:
http://commonthread.us/wp/wp-content/uploads/2016/10/Octubre-Halloween-Chart.pdf
The pattern includes several different skulls from which to choose.

I stitched the skulls on 14 count white plastic canvas, backed the ornaments with black felt and added a black satin ribbon loop for hanging.