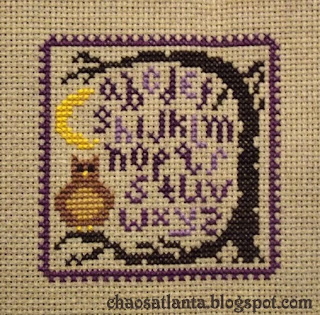 "Little Owl Sampler"
by Knotted Tree NeedleArt
Pattern was featured in the 2012 Just Cross Stitch Halloween Special Issue. Stitched on a scrap of 14 count "something or other" with leftover bits of floss.  Just for fun, I used a lighter shade of purple for the letters that appear in my name.
Posted by cheryl 4 comments:

Thank you so much for all your comments on the post about Plans for Next Year.  I am so pleased that so many of us want to continue and you're enjoying the blog.

We had some great suggestions for new themes for 2016 and as ever it was quite hard to choose.  The favourites from this year are Black Cats, Pumpkins and Ghosts so they will all feature next year.  I also amalgamated some categories into one (Bats and Owls have become Winged Creatures).  I have included two free months so you can stitch your choice even if it didn't make the list this year.

May - Spiders and Bugs


You can be imaginative with your choices, the theme doesn't have to be the main feature of the ornie as long as it is in there somewhere!

I also have a larger piece which features many of the themes so I'll be showing that too.

Lisa had a great idea of theming the months according to the alphabet.  We thought this would fit in very well with The Alphabet Club posts.  I have done A-D so far and December's will be E.  So if you have any spooky stitching which fits in with the letter E please email me a picture before the 1st December.  It could be a designer beginning with E or a design title beginning with E or an E feautured in the design (Spooky Elephant anyone?).

Just to finish off a wordy post, here is Trixie The Hallowe'en Witch from Brooke's Books looking very elegant: 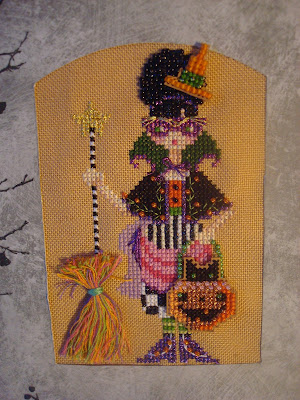 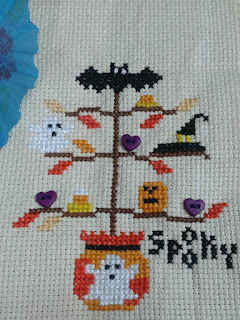 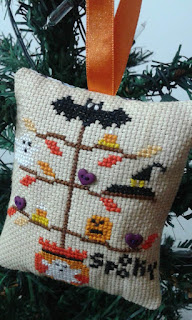 It's a little one but I have big plans for it!  This Creepy Tree is by Blue Ribbon Designs from the latest Just Cross Stitch Hallowe'en magazine.

There is a series of 8 small designs, each one only 27x27 stitches.  I'm planning to stitch all of them on this piece of random 32 count blue linen and make them into something.  Watch this space! 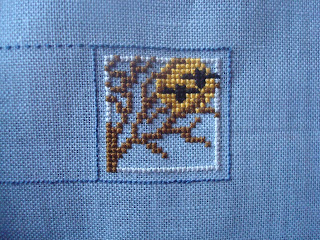 Some of the other designs: 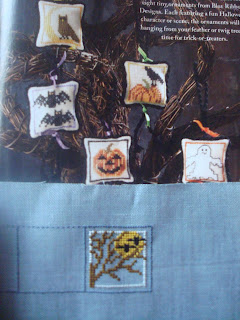 Thanks for all your suggestions for themes for next year.  I'll be going through the emails and comments and making the final list soon.

Thanks to everyone who replied to the email with your suggestions for themes for next year.  Here's another chance to have a think.  Also for those people who follow the blog but haven't signed up to contribute yet - you can leave a suggestion too.

As a little reminder, the SAL has been running for three years now.  The first year was at a different address then it moved here in 2014.  Here's a recap of the themes for those years:

You can see that some of those categories feature every year and some only make the occasional appearance.  There will always be a couple of Free Choice months too so you can stitch the designs which simply don't fit into a category.

And just to include a picture to brighten up the post, here's Trixie the Hallowe'en Witch from Brooke's Books ready to be assembled this week: 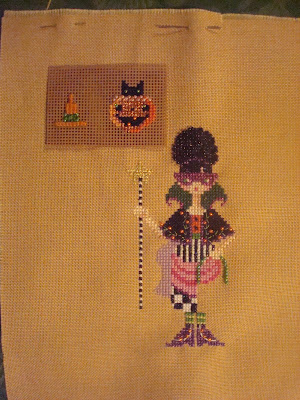 Posted by Jo who can't think of a clever nickname 2 comments:

Email ThisBlogThis!Share to TwitterShare to FacebookShare to Pinterest
Labels: 2016 Themes

D is for Devil, Death and Dressing Up - Revisited 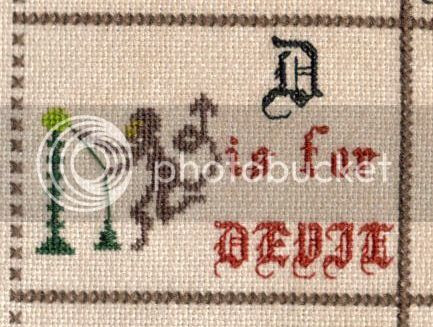 D is for Devil from A Dark Alphabet designed by Julie and Becky's Note of Friendship blog.  So you might be wondering why there is a monkey in this picture?  In Dutch samplers the stitchers would often use a Spinning Monkey to represent the Devil rather than tempt bad luck by stitching Old Nick himself.  The monkey stood for folly, laziness, lechery and vanity and his punishment was to be turned into thread.

I wonder if we get a bit of "monkey thread" sometimes, you know where it knots and twists and won't lay neatly no matter what you do?

If you like your devils on the cute side, Ellen Maurer-Stroh has a series of stitching devils, this one has a bobbin (ready to tangle?) and there is one with a pincushion and a sweet pair playing with a sewing machine. 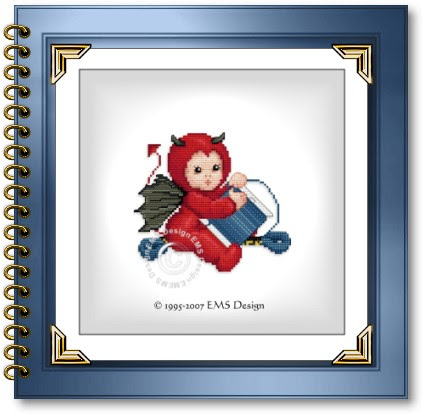 Onto Death, that's a gloomy subject for stitching? 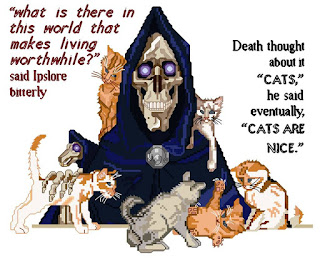 So where do we get these images of Death from?  In England, Death is often called The Grim Reaper and from the 15th Century onwards is shown as a skeletal figure cloaked in hooded black  and carrying a large scythe.  In the Bible there is also a reference to "The Angel of Death" who reaps the firstborn sons of the people of Eygpt.

Probably the most common image for Death in cross stitching is the gravestone (but I'm saving those for G!) or some of the verses stitched on antique samplers.  For example this piece by Amy Ball which includes the couplet "When I am dead and in my Grave, my Friend's in Hand my work may have":

These samplers were often stitched by very young girls and it makes you realise how close to death people were in those days.  Many women would have given birth to several children only to see three or four survive into adulthood.

And onto something more modern and cheerful!!  Dressing-up.  Why do we dress up for Hallowe'en?  This tradition goes back to Celtic times when people believed that evil spirits walked the land on Hallowe'en.  The best way to fool these spirits was to disguise yourself as someone else.  In early 20th Century America Trick or Treating was referred to as "guising" before the actual term Trick or Treat came into use.

Here's a cute pair dressed up ready to go Trick or Treating: 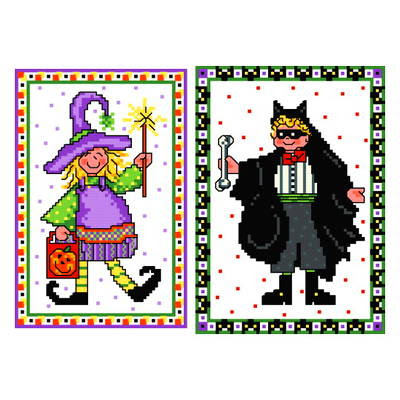 So what's your favourite dressing up costume?  Do you enjoy dressing up or do the words "Fancy Dress Party" strike dread into your heart?  Being rock fans has always made dressing up for Hallowe'en easy for me and my friends.  We already have wardrobes full of black velvet and lace, long wild hair and leather coats.  Just add a white hair streak, some extra eyeliner to the black lipstick, nail varnish and the jet jewellery and you have the perfect Vampire.  In fact, at one party in our local pub, my friend brought his new girlfriend to meet us all for the first time.  I admired her outfit and hair only to be told she hadn't realised it was Fancy-Dress and that was how she dressed all the time! 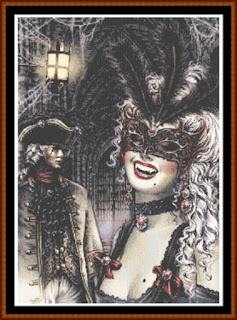 This would definitely make a great Fancy Dress outfit!

Posted by Jo who can't think of a clever nickname 3 comments: