This month I stitched one of LynnB's Mini Black Cats. 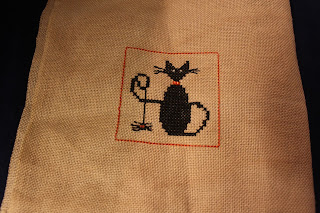 He has a beaded collar and spidey has eyes.
Gwen 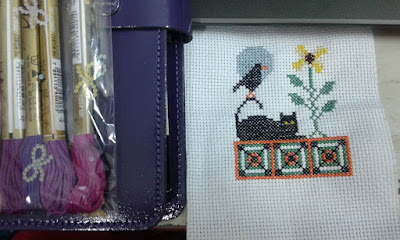 Black cats is always a great theme, there are black cats everywhere around the internet.  But do you find sometimes that too much choice makes it harder to choose instead of easier?

I was looking through my Just Nan Hallowe'en chart collection and found one called Ghoulies and Ghosties.  It's bigger than an ornie so I just stitched the bottom part for this month and will do the rest another time.  Hopefully before Hallowe'en this year. 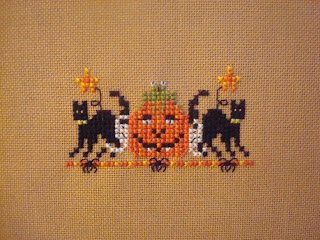 There's a lot of detail in this for a small piece - cats, pumpkin, toad, ghosts and spiders!  You can see the full design on Just Nan's website here - JN180 Ghoulies and Ghosties
Posted by Jo who can't think of a clever nickname 9 comments: 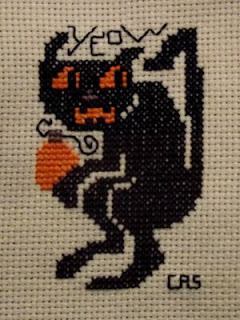 PS: I thought I would add a photo of the black cat ornament I stitched last year: 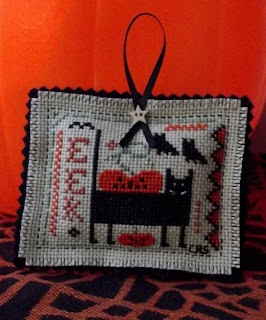 Hello everyone - I've been absent for a while stitching gifts and larger pieces.  Now I'm back to Halloween ornies.  One of my bigger-than-ornie-size pieces is Last Stitch Cemetery by Hinzeit.  Perhaps this one can pass for my April ornie?! 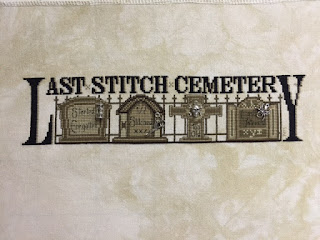 Stitched on 32ct Legacy lugana by Picture This Plus.  Yet to be framed.  My May pumpkin ornie is Along Came a Spider by Amy Brueckin from the Sept/Oct 2011 JCS.  Stitched on 30ct WDW peoria purple linen (it's really a very bright purple, but looks gray in this pic) with DMC.  I decided to do something out of the ordinary for the shape.  I like how it turned out! 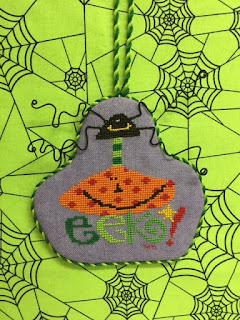 My choice for June is a Lizzie*Kate freebie, All Hallows Eve stitched on 32 ct. olive linen and finished with a pom-pom trim. 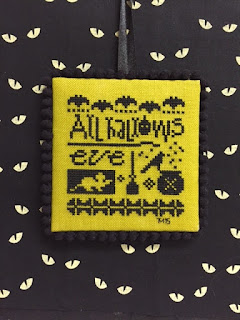 My July haunted house is a popular choice as I've seen it a few times.  Called Boo Mansion from Blue Ribbon Designs in the Sept/Oct 2011 JCS Halloween issue.  Finished into a pillow with hand-made cording. 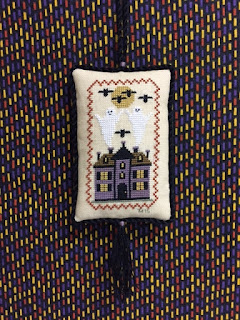 And, finally, my black cat for August is a section of a larger piece called All Boxed Up by Michelle Lutzen in the Sept 2014 issue of Cross Stitch & Needlework Mag.  Stitched with DMC on a 28ct purple linen scrap and finished with fabric, cording, and buttons. 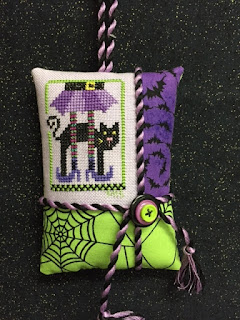 Whew!  I think I'm all caught up.  Yeah!  Hope you enjoy.  Theresa
Posted by TheresaM 9 comments:

A is for All Hallow's Eve, Autumn and Apple - Revisited 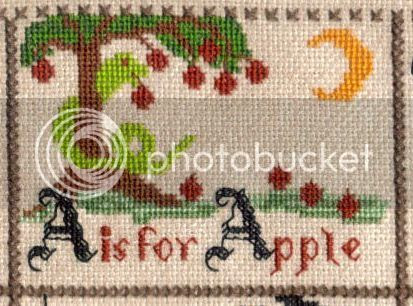 A being for All Hallows' Eve.  Like many of our modern festivals Hallowe'en has become more secular after years of being a Christian celebration built upon a Pagan festival.  Other examples include Easter and Christmas.


The Celts celebrated the feast of Samhain (the name comes from the Old Irish for Summer's End) as the first and most important of the four quarter days in the Medieval Gaelic calendar.  The other three being Imbolc (1st February), Beltaine (1st May) and Lughnasa (1st August).  Samhain marked the end of the Harvest Season and the start of the darker days of Winter.  It was seen as a time of year when spirits and the fae could cross the borders into our world more easily usual.

When the Celtic countries became Christian the Church realised that converting the old Pagan festivals into religious days was the best way to get the peasants and common folk to change their ways.  After all, you can't go dancing naked round the hill-tops if you are praying in church all day!

For Christians, 1st November is All Hallows' Day or All Saints' Day which makes 31st October All Hallows' Eve.  Hallows' Eve being shortened to Hallowe'en with e'en meaning "evening".

So many of the modern customs have their roots in traditions started by the Celts or the Christians and molded, changed and adapted across the years.  I wonder if the early Pagans or first European Christians would recognise our current celebrations?

If you'd like to read more about the origins of Hallowe'en I started at this Wiki page and wandered around from there!

A is also for Autumn the season when Hallowe'en occurs (in the Northern Hemisphere anyway).  Here is a cute Autumn design I stitched by Erica Michaels on the Rainbow Gallery website 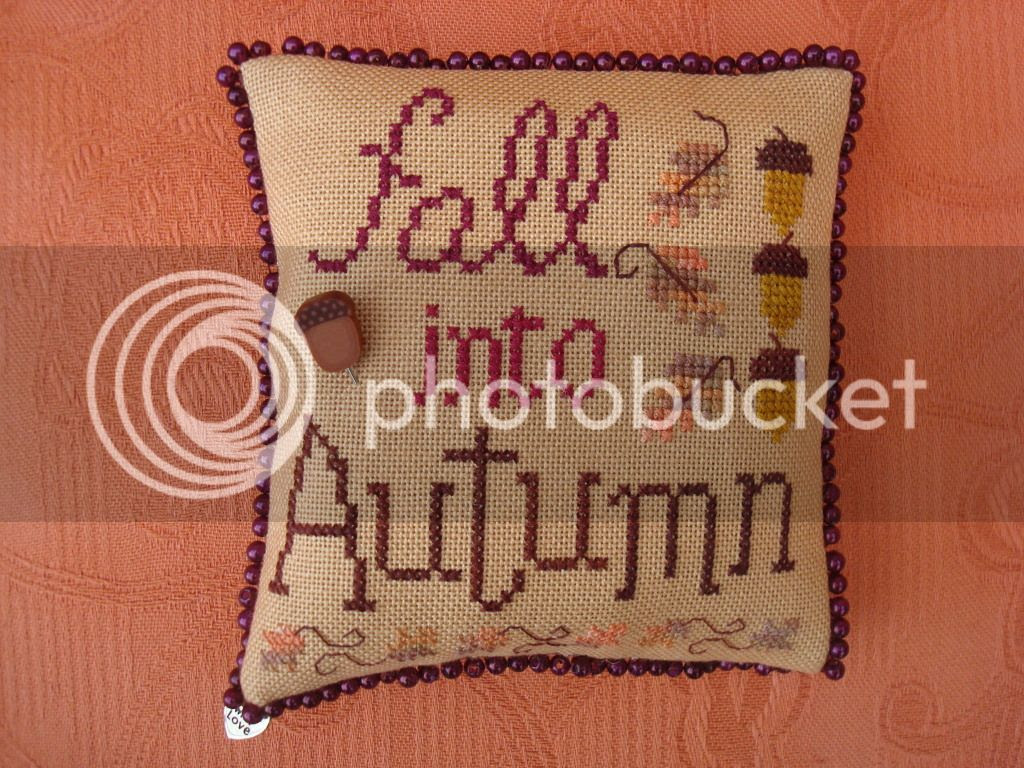 And A is for Apple as the design at the top of this post shows.  This is one block from A Dark Alphabet designed by Julie and Becky's Note of Friendship blog.

Apples are believed to be associated with Hallowe'en via the Roman Fertility Goddess Pomona whose festival was held in November.  When the Romans came to Britain they discovered the Celts' belief that the pentagram was a fertility symbol.  When an apple is sliced in half horizontally rather than vertically, the seeds form a pentagram-like shape, and it is thought that the manifestation of such a symbol meant that the apple could be used to determine marriages during this time of year. From this belief comes the game bobbing for apples.  During the annual celebration, young unmarried people try to bite into an apple floating in water or hanging from a string; the first person to bite into the apple would be the next one to be allowed to marry. 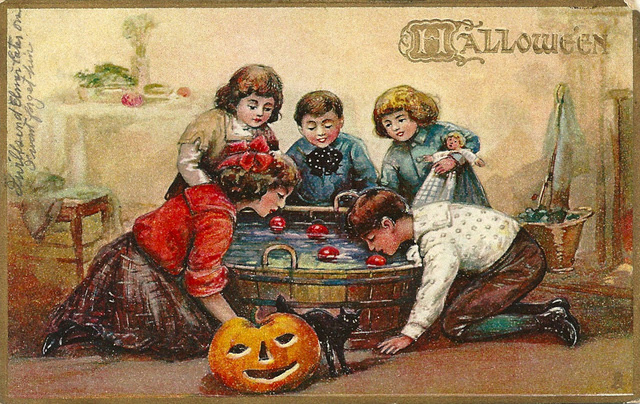 Another superstition involves peeling the apple in one long strand and throwing it over your shoulder, the peel will form the initial of your future husband's name.  This actually worked for me as my hubby's name begins with S and my peel invariably fell in an S shape.  What do you mean, it always falls in an S?

Of course the Christians saw the apple as the downfall of humanity when the Serpent tempted Eve with one in the Garden of Eden, so it is hardly surprising the humble fruit has become associated with the Dark Celebrations of Hallowe'en! 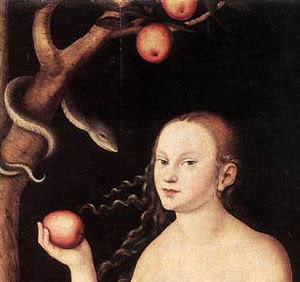 I looked around for some Hallowe'en Apple themed stitching, most of them feature pumpkins rather than apples but I found this one: 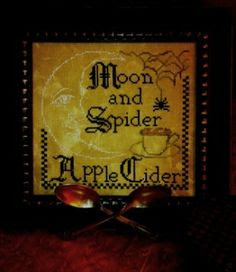 And this lovely Caramel Apple from Mill Hill: 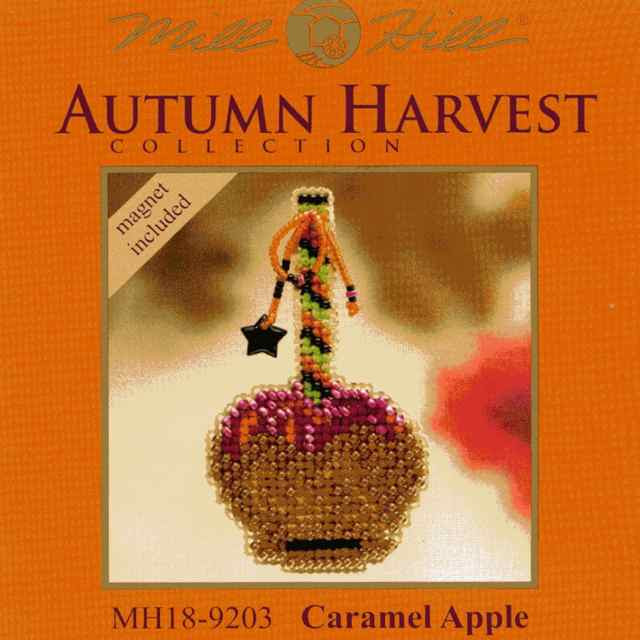 So how do you like your apples?  Bobbed, baked, cooked in a crumble, covered in toffee or caramel?  Or maybe pressed into cider?