I missed the June ornament post, since I was trying to finish my oldest UFO and couldn't start anything new!  I planned to stitch Boo!, the free chart from Glory Bee, as my freebie Halloween ornament for June.  This also fits the July Pumpkins theme! 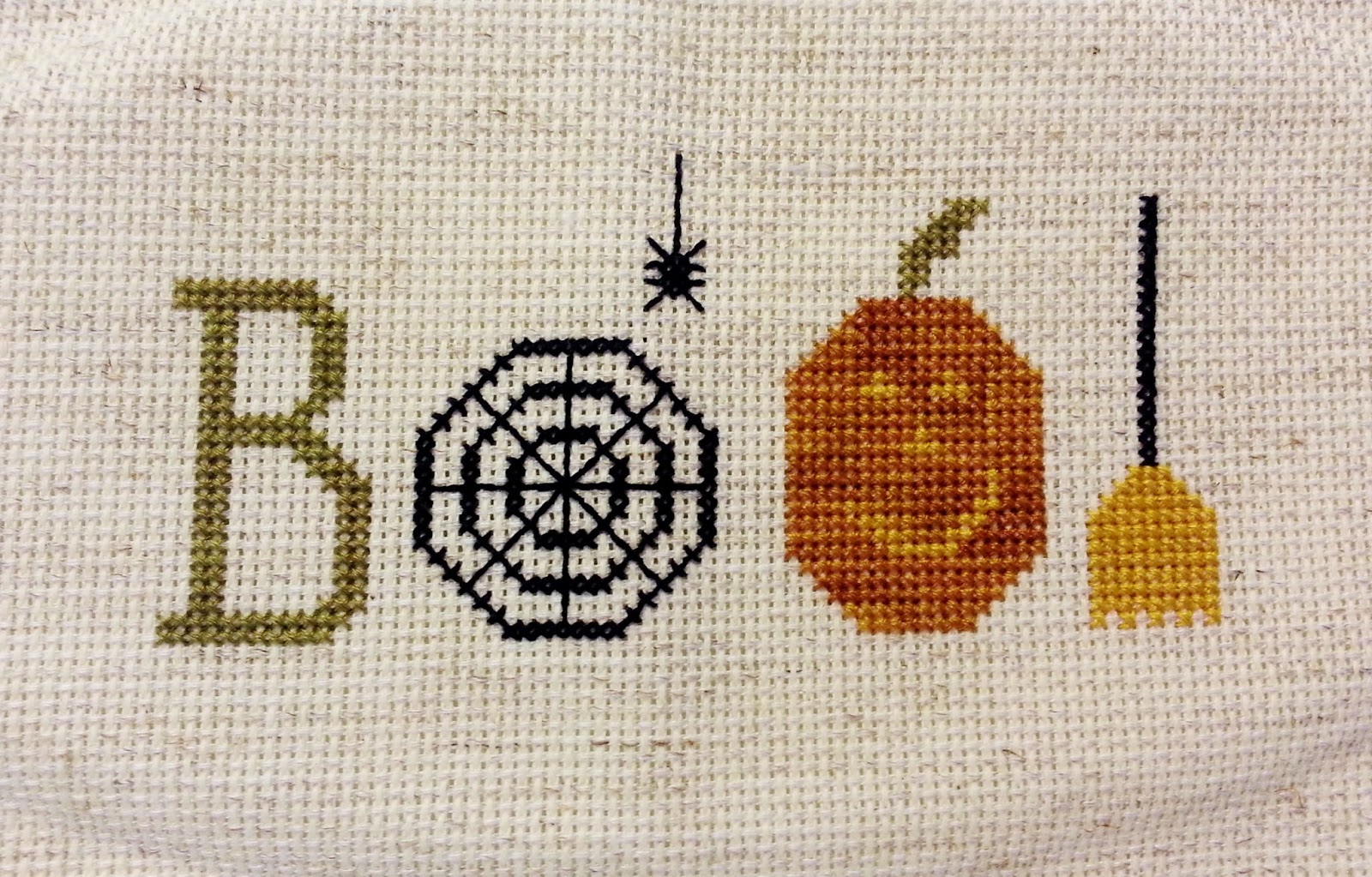 
One of my favorite pumpkin stitches
I stitched this in 2007 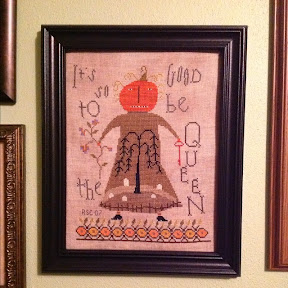 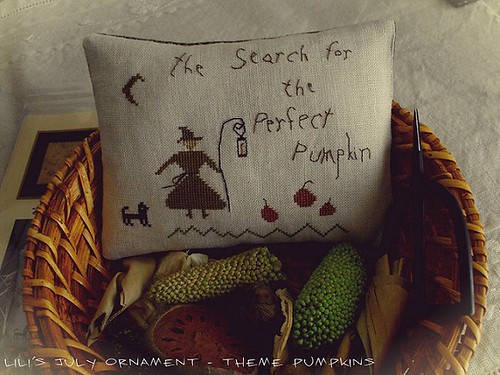 I love the month theme: pumpkins!!

My July ornament is a model from Stacy Nash Primitives: "Search for the Perfect Pumpkin".

Thank you all so much for your sweet comments on my June ornament!! 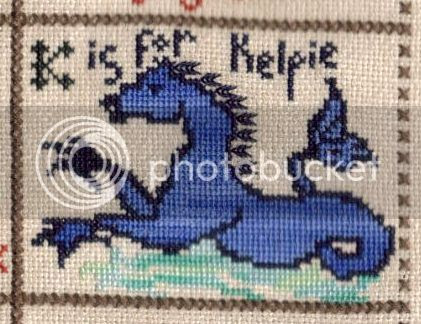 K is for Kelpie from A Dark Alphabet designed by Julie and Becky's Note of Friendship blog.


The Kelpie is a mythological shape-shifting water demon in the shape of a horse from Scottish Celtic history that lures people, especially children, onto its back then takes them out into the water, where it kills and eats them.  It was believed that if you owned the Kelpie's bridle you could control it.  But who wants to get close enough to find out?

Funnily enough I couldn't find many cross stitch charts of kelpies, but I find some rather nicer Water Spirits.
But there was this one in Etsy: 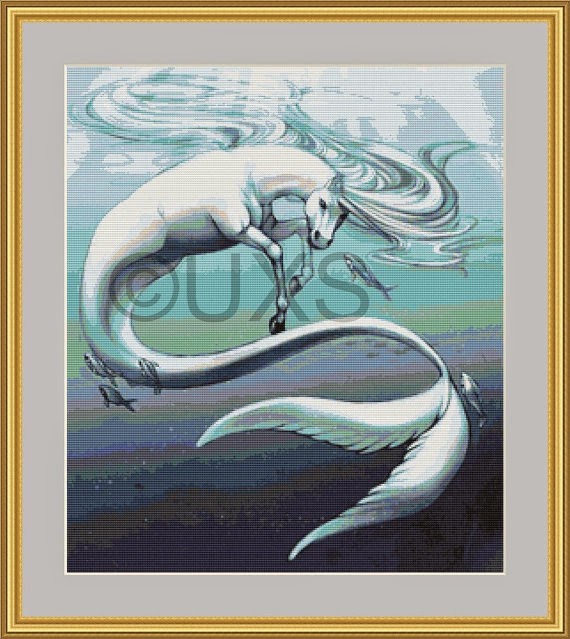 Unconventional X - Beneath the Ice 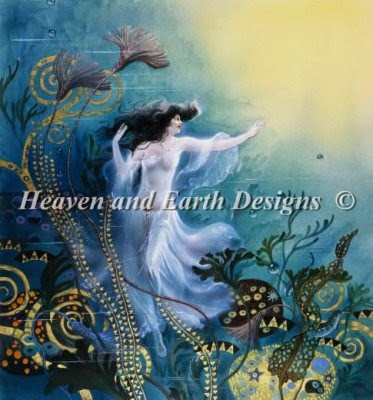 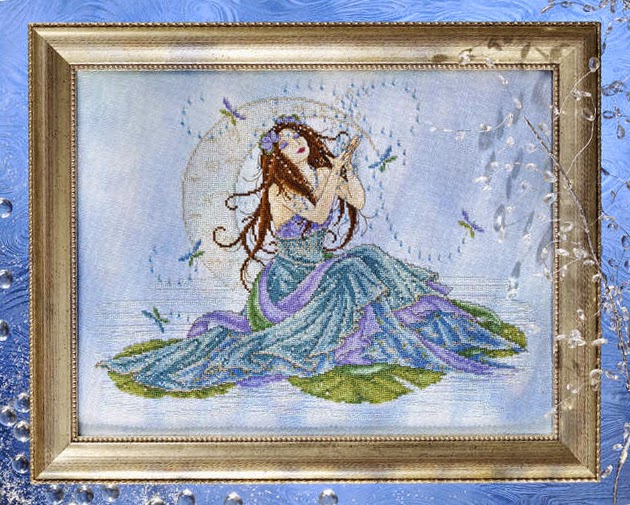 Still on the subject of Water Creatures, we have the Knucker; a kind of Water Dragon found in the county of Sussex in England.  There are references to them in the epic poem Beowulf and also in the church in Lyminster where you can see the gravestone of the knight who slayed the great beast.  You can find out more about this story here Dragons and Serpents in Sussex 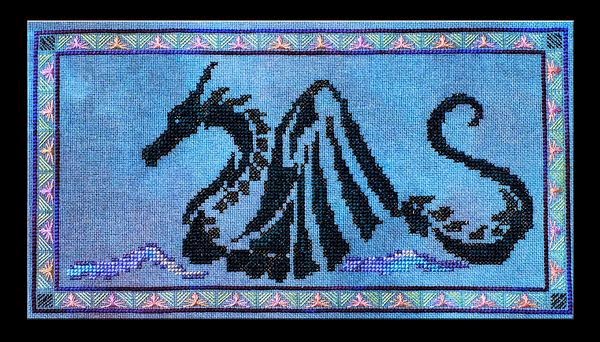 Dragon Dreams also have a freebie Water Dragon along with Fire, Air, Earth and Spirit

I got completely stuck on a final K so did a little Googling and found this interesting list of "Legendary Creatures beginning with K".  Many of them seem to be Japanese, so here are a few I liked the sound of:

And here is a nice Japanese cross stitch to finish with: 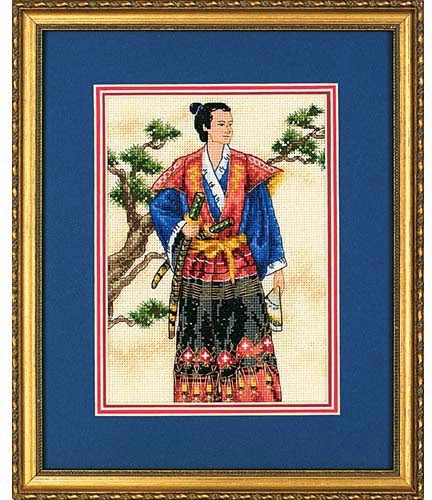 He does at least look like he could battle monsters for us!

Nice to see a few Pumpkin finishes being posted.  Please feel free to post any finishes from previous months too, no-one is keeping track of how late they are!

I chose a sweet little Just Nan design for my pumpkin.  It's one of a set of three called Moon Riders.  The other two designs are a witch and a ghost, both sitting on moons. 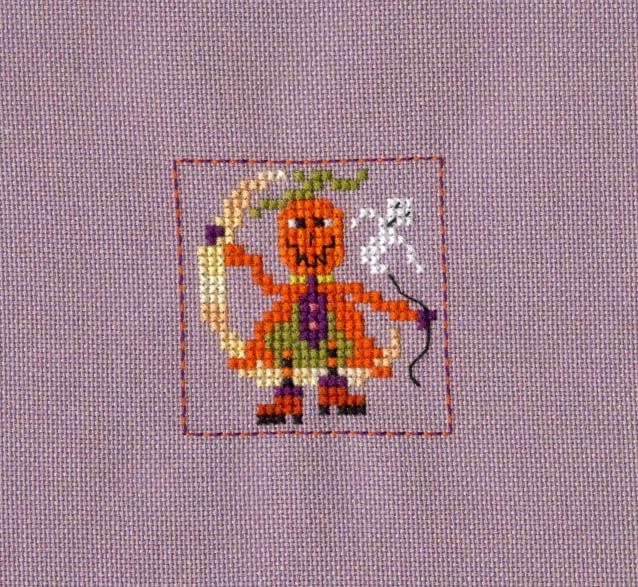 I used a piece of my favourite 32 count lavender evenweave for this and the recommended DMC, except for the moon which I changed to DMC 4090, a variegated thread.  I also changed the plain border to a stripy one.

Ever since I saw this ornament in the 2010 JCS Halloween issue, I knew I would stitch it someday.  She's stitched on 28 ct Willow cashel linen and finished with tutu trim!  I love the way she came out! 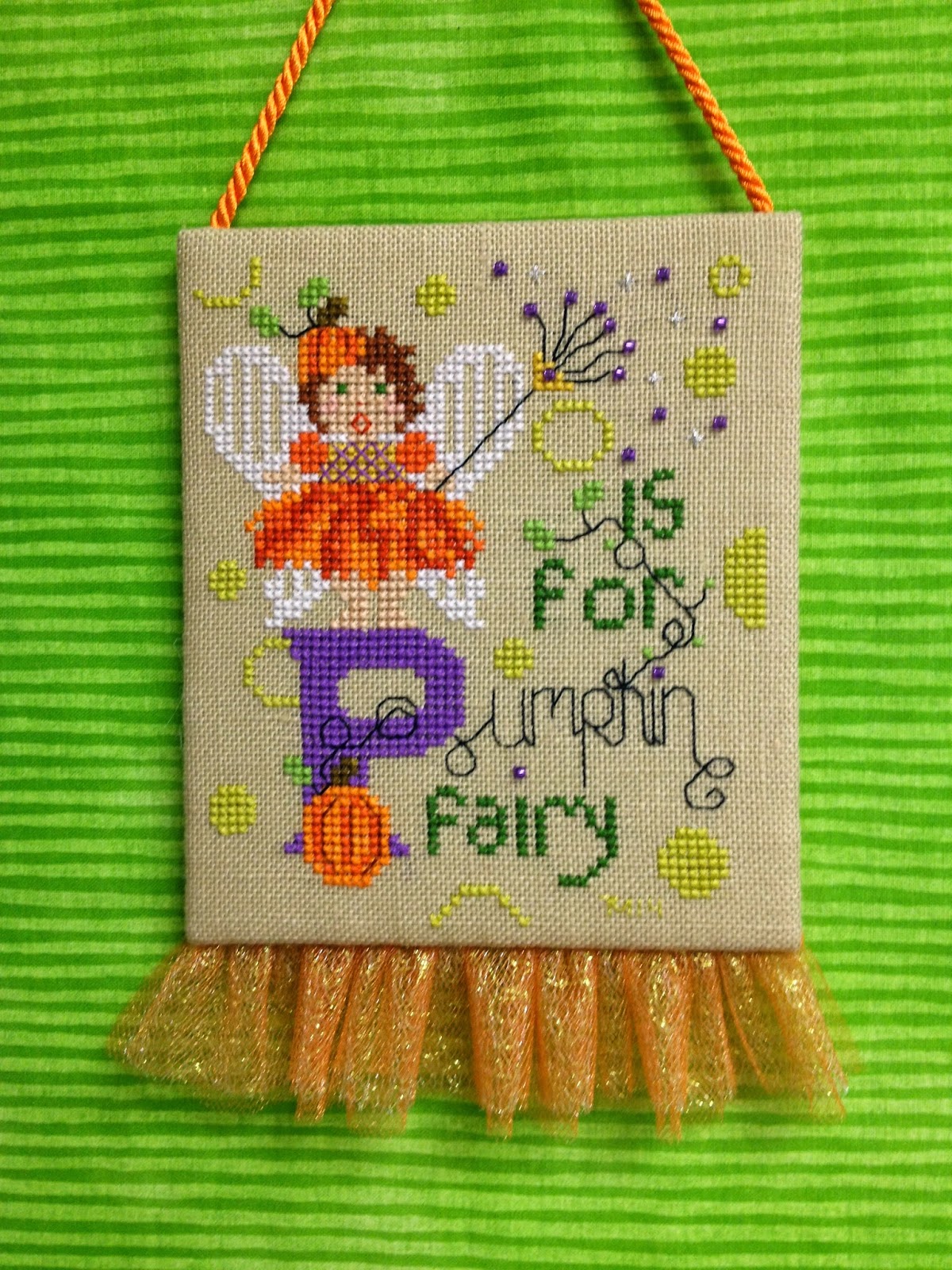 I'm a little late for June . . . kept thinking it was pumpkin month so now I'm all set for July!  Below is my freebie for June, a little Prairie Schooler pattern I've had forever.  Stitched on "haunted" cashel by Picture This Plus and finished as a tag.  This is the first time I've made a tag, but I followed Vonna's easy instructions (http://tts-learntofinish.blogspot.com/2012/02/floss-tag.html?m=1), and wa-la, a cute little ornament: 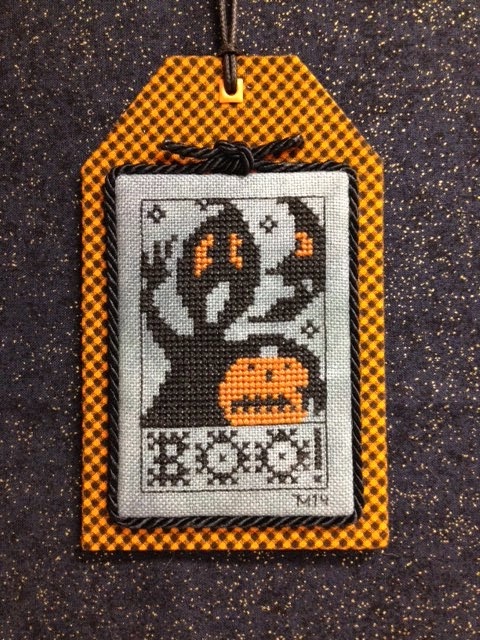 Well yes I am a little behind... sorry :(
But stitched a pumpkin and thought YES!! July!!  Its not spooky so not very Halloweeny.. is that a word? 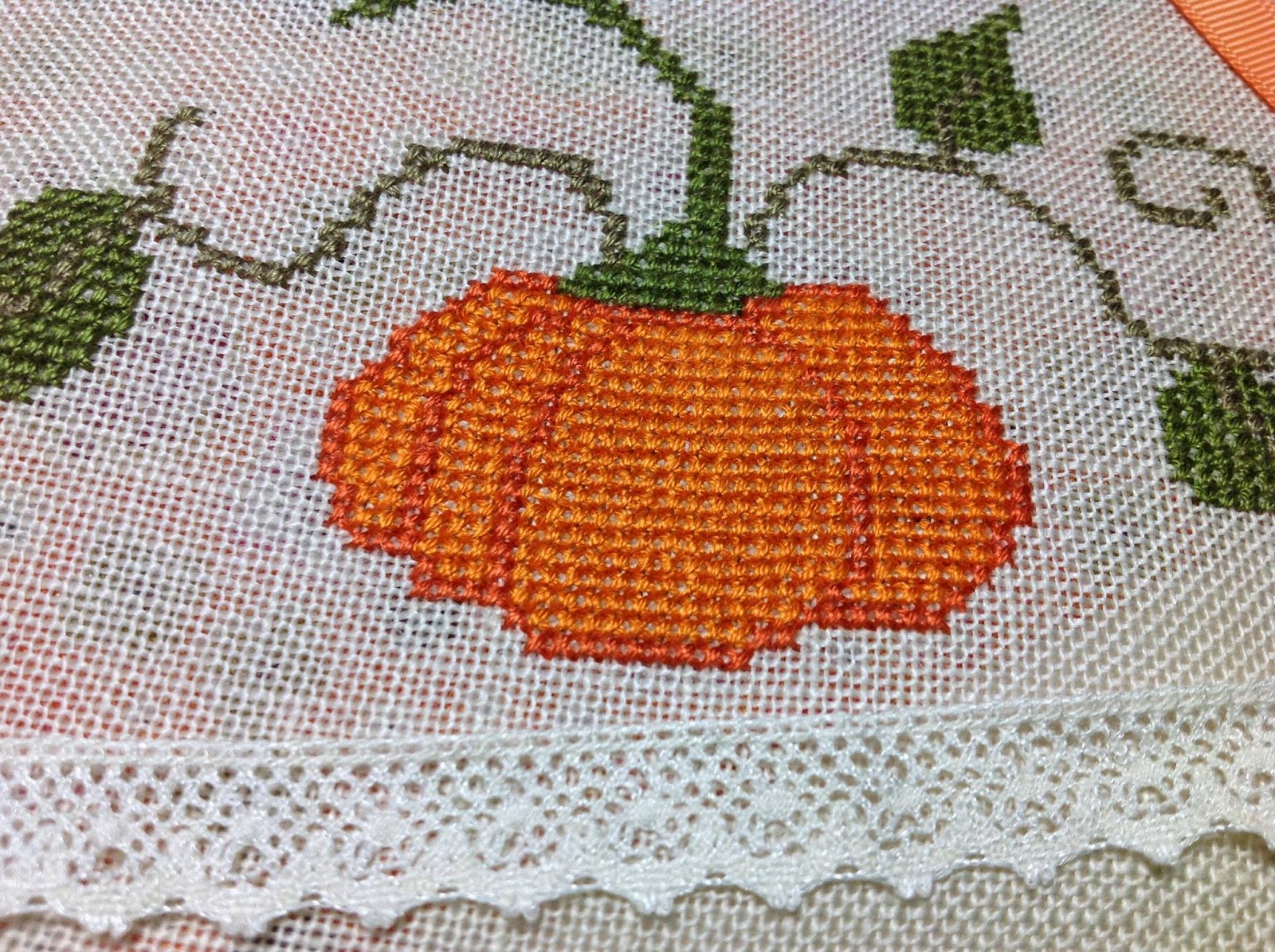 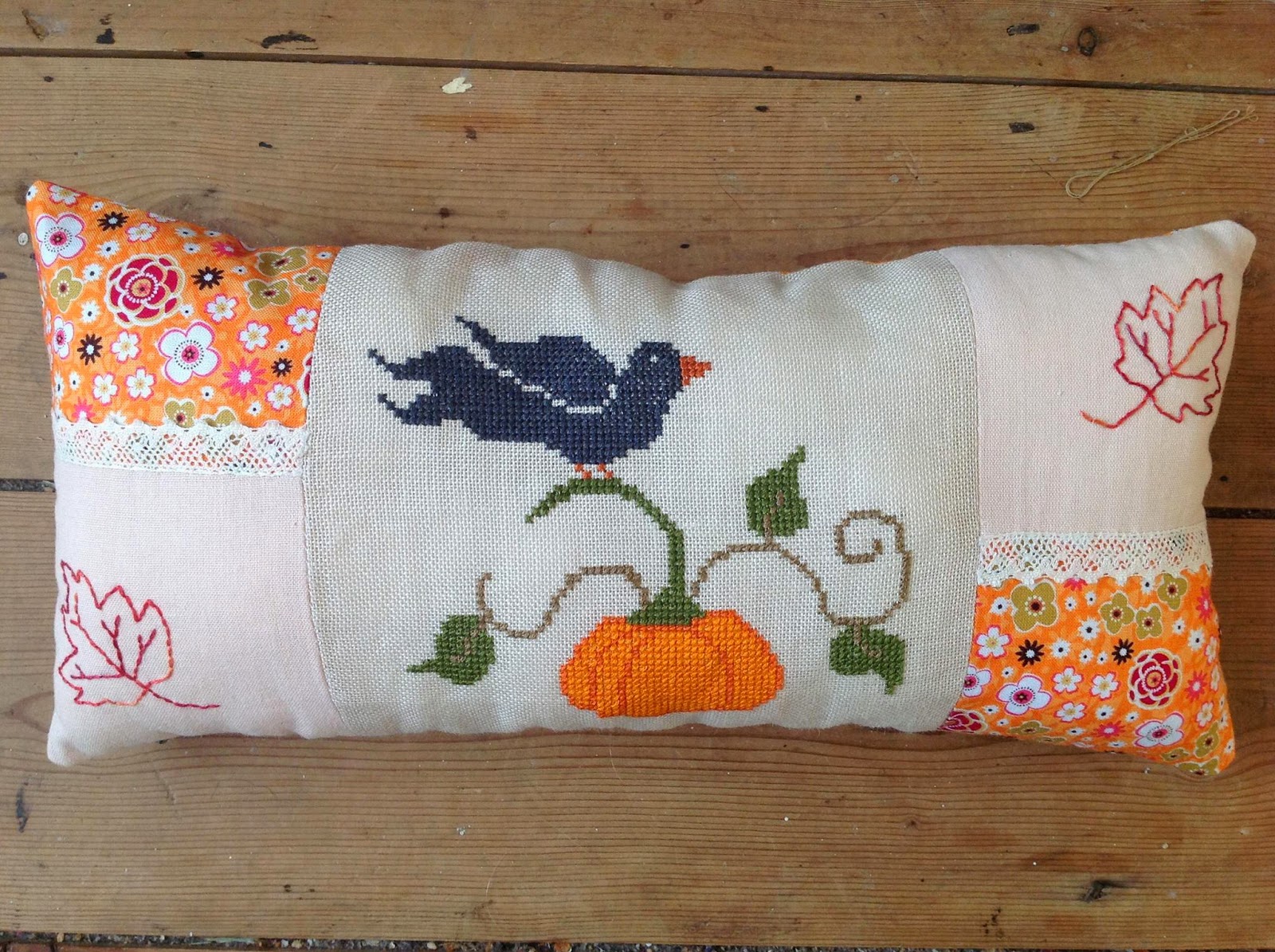 This design is a freebie and already been added to the list, under crow and pumpkin.  The original has alphabet letters surrounding the design... I left them out.

Made it into a pillow to go in my stitching basket :)

Email ThisBlogThis!Share to TwitterShare to FacebookShare to Pinterest
Labels: Jacquie, July 2014, With Thy Needle and Thread

J is for Jack-in-the-Box, Jack O'Lantern and other famous Jacks 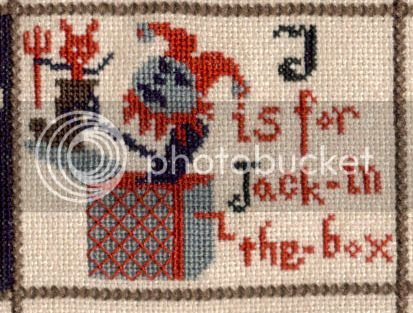 J is for Jack-in-the-Box from A Dark Alphabet designed by Julie and Becky's Note of Friendship blog.

Here's what Becky said about this block at the time:


"Depending on the country, the story varies a bit in it's telling, but most involve a devil! In French the jack-in-the-box is called a "diable en boîte", which means "boxed devil".  One of the first jack-in-the-boxes was pictured holding a boot with a devil in it. Some believe that the name "Jack" was a reference to the devil, referred to as a jack - is this also where we get Jack-o-lantern?"

Here is the perfect little 3D Jack-in-the-Box by Susan Myers: 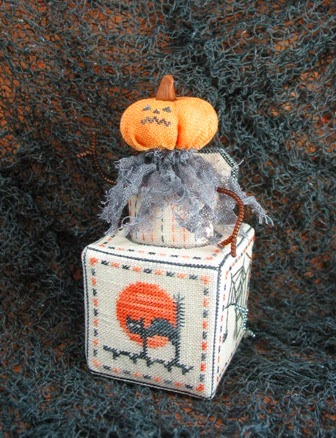 Now some people might think that looks a little tricky but I stitched Susan's Drac-in-the Box last year and thanks to some nice clear instructions it really wasn't too difficult.  Good preparation and lots of slip stitching is the key!  Here is Drac: 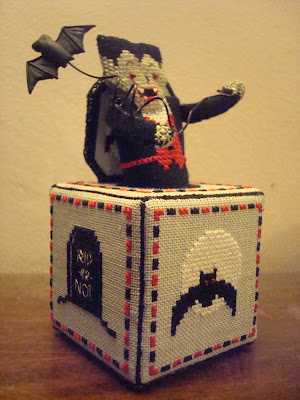 On to Jack O'Lanterns, most usually a pumpkin in modern times as they are the perfect size and shape for carving into heads or more imaginative shapes.  Vegetables have been carved out and used as lanterns for centuries, from the Maori (gourds) to the English (turnips, manglewurzels or beets).  The carved pumpkin was first used at Harvest Time in America but by 1866 had become associated specifically with Hallowe'en.

There are many stories about the origin of the name "Jack O' Lantern" with some believing Jack is the Devil and others saying he was a man who tricked the Devil.  This website tells the story of Stingy Jack and the Devil.

There are so many great Jack O'Lantern cross stitch designs to choose from, here are just a few: 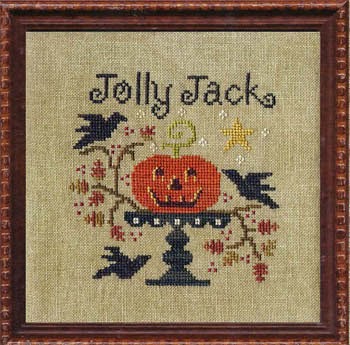 All Through The Night - Jolly Jack 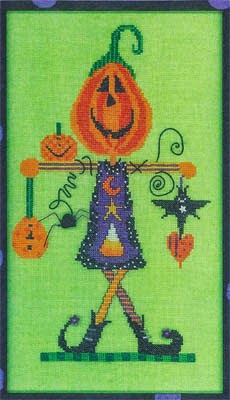 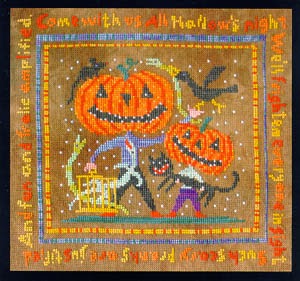 Birds of a Feather - All Hallows Night

There are Pumpkin Carving Festivals all over the world and Pumpkin Carving Competitions too.  I asked my older son to choose his favourite from one website and here it is: 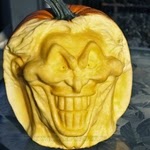 Another J, for the Joker!

Other famous Jacks include Jack Skellington: 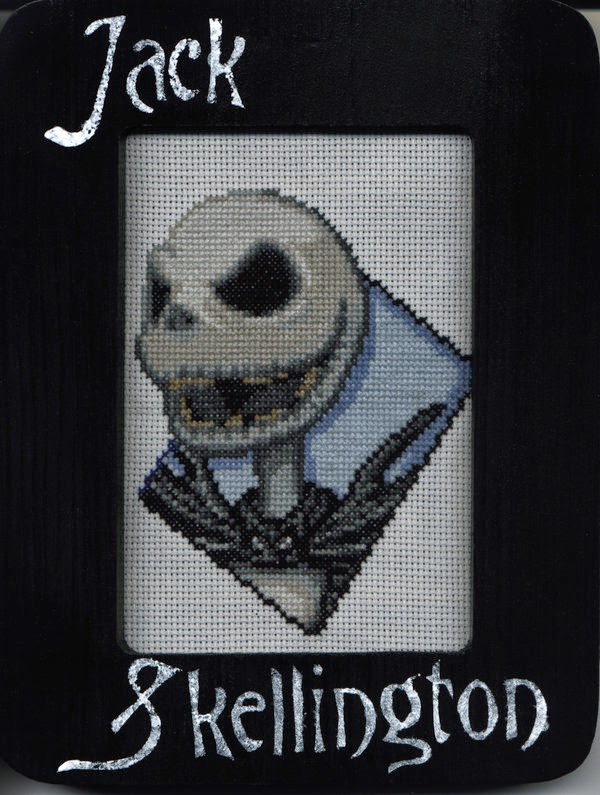 Jack Skellington is the main character in the Tim Burton Nightmare Before Christmas animation.  One of our favourite Hallowe'en films.  Jack visits Christmas-land and tries to explain to the inhabitants of Hallowe'en Town what it is all about.  Of course, they put a Spooky Spin on the festival and it all goes horribly wrong.

The other famous Jack is Jack Sparrow, not really very Hallowe'eny but he is a popular character for people to dress up as for the occasion so that's why he's here!! 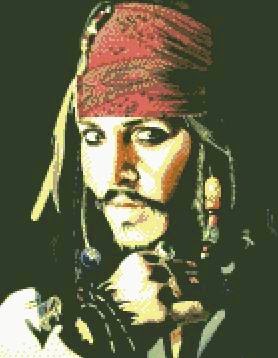 Pattern Maker - Johnny Depp
There are lots of computer generated Jack Sparrow charts out there but this one appealed because it is based on original artwork by Brian Duey rather than a photo taken from the internet.

And finally, still on the subject of famous Js, here is Jason from the Friday 13th films: 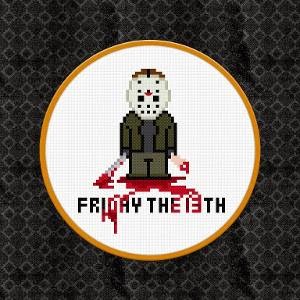 I started my stitching for this entry very late this month. It was a very quick stitch and I just managed to finish the stitching and assemble a pincushion. I plan to add some beaded pins later, need to visit the bead section the hobby store. 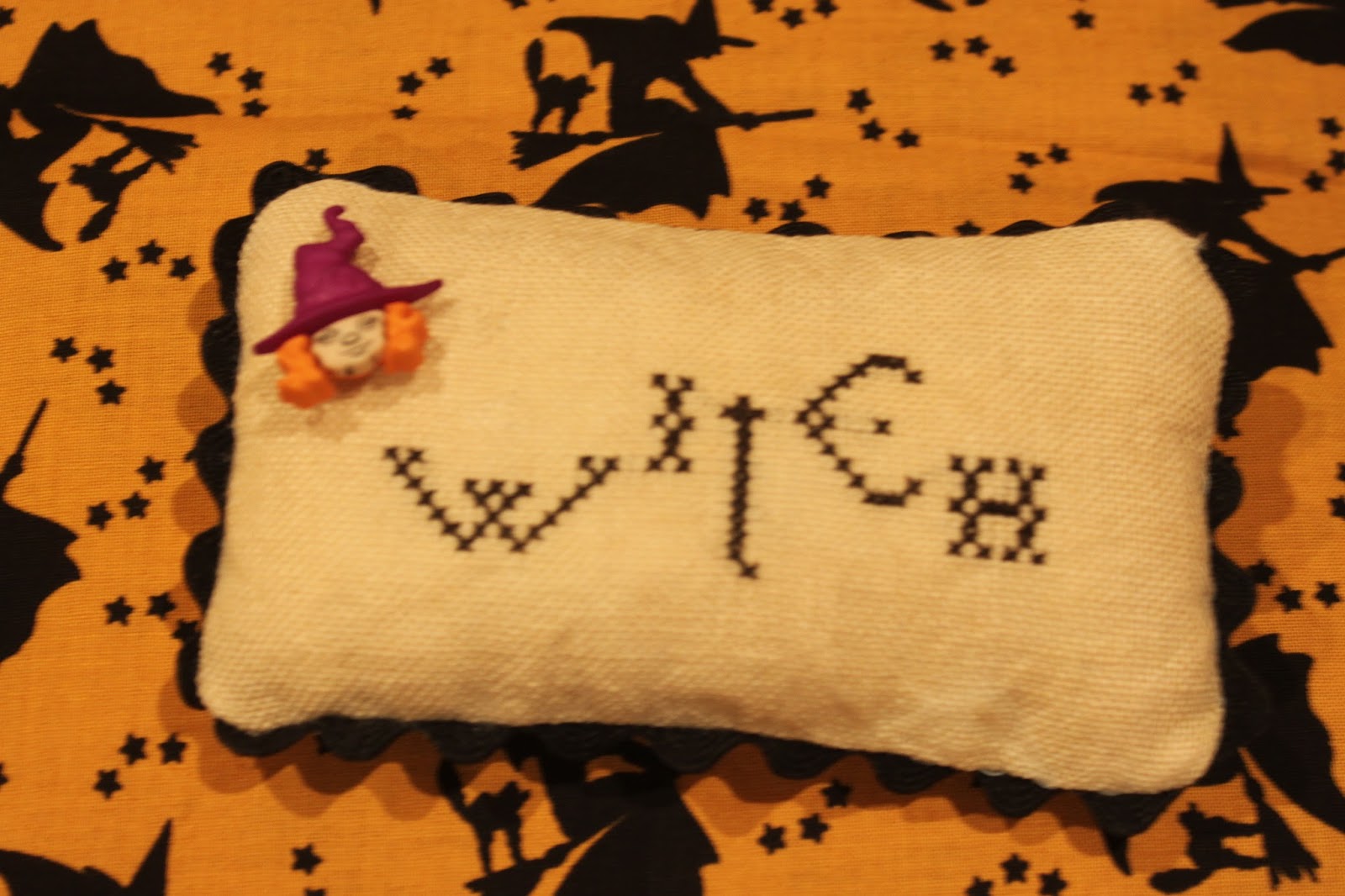