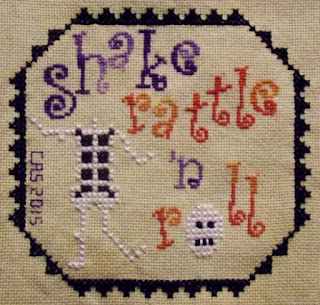 shake, rattle and roll aren't usually spooky words ... but once you apply them to a skeleton, they take on a new meaning and there you have it!

The pattern is Shake, Rattle 'n Roll by Pam Lewis and Susan Rohm of Praiseworthy Stitches.  Featured in Just Cross Stitch magazine in the October 2015 issue.

I stitched this pattern on a wee piece of 32 ct. tea stained fabric of unknown origin.  2over2 for the skeleton & border, and 1over1 for the text - using both magnifying glasses and a hand held magnifying lens (where did I put my good eyes?)

I'm not sure how I will finish it, just yet ... but stay tuned for further developments.
Happy Spooky Stitching!

Eek!! Spooky Words.... wow what a great theme for September.

I had this one planned right from the start of the year!  Even though I knew exactly what I was going to stitch for September I did also have a look at some other "spooky" word designs just in case... after all we can never have too many spooky charts in our stash!!

So what did I stitch for September's theme?  Well, it just had to be Lizzie Kate's "Eek!"

This chart/kit is a Limited Edition Kit and was given to me a couple of years ago.  It included the fabric, beads and buttons but not the threads, so I stitched it with DMC threads which is why it does look slightly different to the model piece in the chart pack photo.

See you next month!

I can drive a stick! 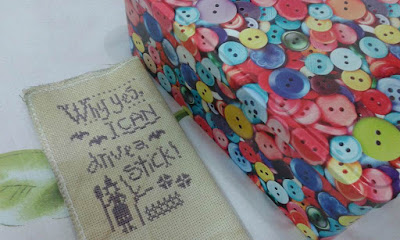 A quick one today to catch up on May's theme of pumpkins ... 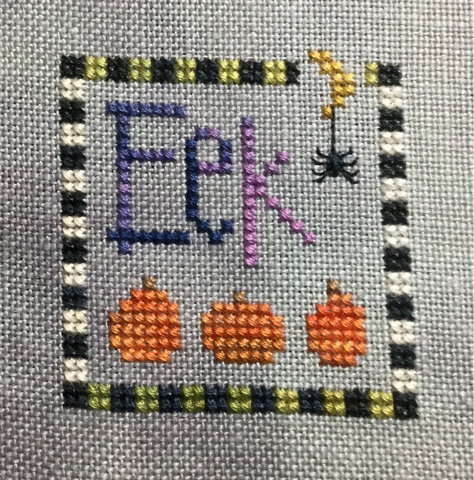 I've been in a stitching wasteland since April so I have a lot of catching up to do - the Hallowe'en SAL is helping to get me back into stitching again. My choices for the two months have been as follows: 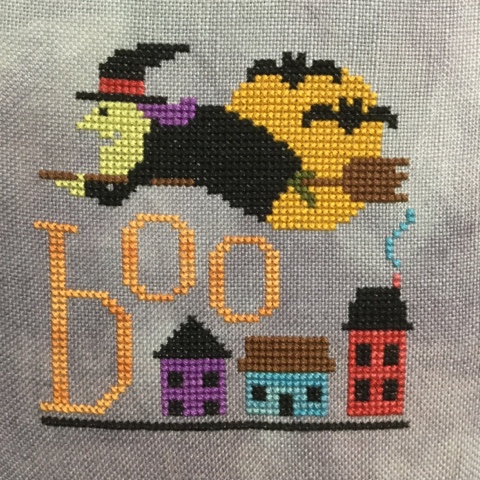 For September:
"Eek Boo Hiss" by Lizzie*Kate (the Boo part)
Stitched on 32ct Thunderstorm Belfast linen
with a mix of GAST, DMC and Carrie's Creations threads 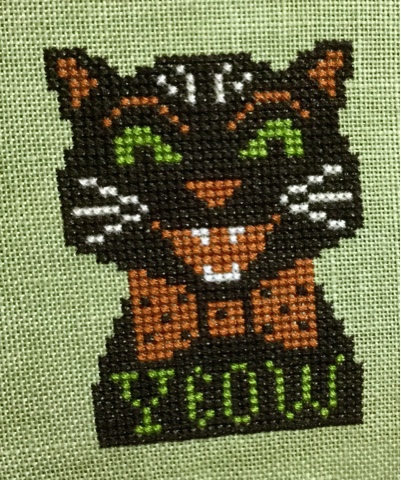 For August:
"Boo To You" by The Prairie Schooler
Stitched on 30ct Guacemole Weeks Dye Works linen
with recommended DMC threads

Like Rita I wasn't sure I would easily be able to find something for this month's theme but as I looked through my issues of JCS I realised there were loads of designs I liked!  Which is probably why I chose this as one of the themes in the first place.

I found a nice design which said Hubble Bubble Toil and Trouble which reminded me of another chart I owned.  When I found that one it was too large for an ornie but in with it was this one which was the perfect size stitched over one.  I do love my over one stitching. 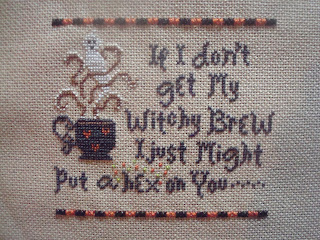 This is the debut design from 2009 by Tammy who has a blog called Witchy Stitches.  It's not easy to see if she has many other designs because there's no page for her own stuff.  But there is a sweet Wynter Witch.

Anyway, I stitched this one using the recommended DMC conversion except for the lettering and mug which I subbed 3799 for plain black.  I thought it was closer to the Gentle Art thread the model stitcher used.  Because I stitched the design over one I was able to cheat on the border and stitch it over two which saved so much time hahaha.  I also added some little starry stitches around the word "hex" just because I wanted to.

I'm not sure whether to scrapbook this with the others or frame it and put it next to the kettle to drop a hint to my family!

Advance notice of a giveaway.  Kaye has kindly offered to sponsor a giveaway next month.  There will be a number of ways to enter, one of which will involve making a post for your October themed ornie.  So make sure you have one!  The theme is Ghosts, most suitable for Hallowe'en month.

As I was starting to think about what to stitch for this theme, I was thinking it might be difficult to find something.  The difficulty turned out to be narrowing down all the possibilities to just one.

I chose to stitch part of a bigger design found in the JCS 2014 Halloween special issue: 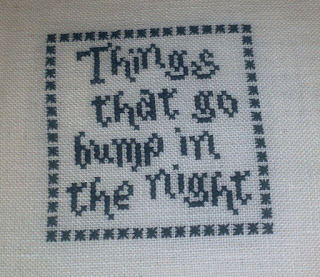 The lighting is poor for the photo...it isn't even dawn yet.  It's stitched with black DMC on antique white linen.

B is for Brimstone, Bats and Brooms - Revisited 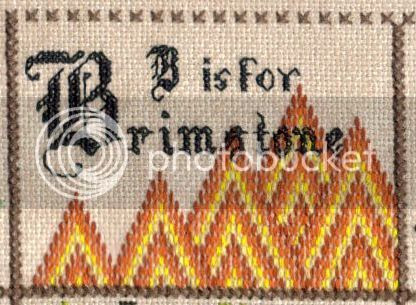 
The link between the bat and Halloween became strengthened with the discovery of the Vampire Bat in the 17th century.  Tales of bats that drank blood had circulated throughout Europe for centuries before but it wasn't till the Spanish exploration of Central and  that there was physical proof.  It was a natural association for a dark holiday, a creature that lapse the life blood of its prey in the dark of night."
Haunted Bay 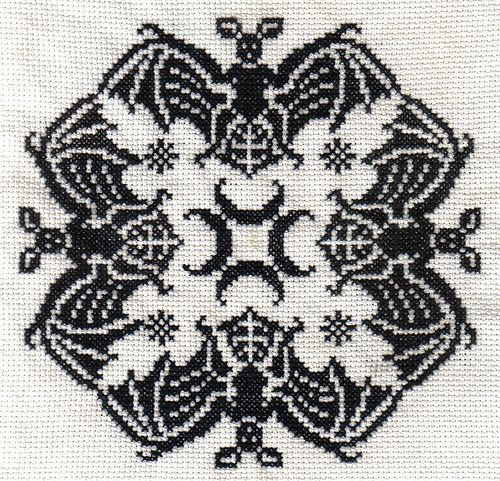 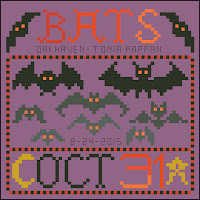 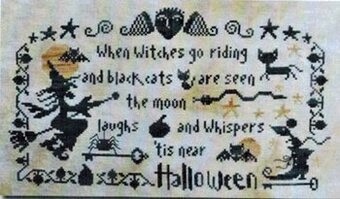 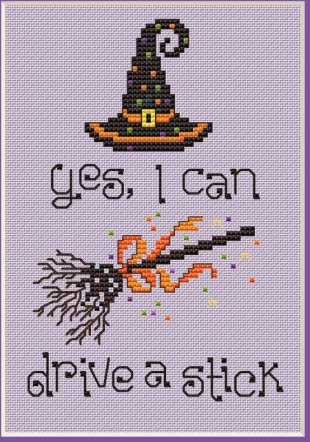 Oops... a day late posting for August!  But, surprise surprise... I do have a black cat to show you!!

While I had always planned to stitch the Black Cat from the Sneak Peek Halloween design for this month, it didn't stop me looking at all of the other beautiful black cat designs that are out there in the big wide stitching world....

So without further ado... here he is:  Black Cat (Sneak Peek Halloween - designed by The Trilogy).

Another square finished on this cute design... next up will be the "ghost" square for October.... just in time for Halloween!