This month, I took some time to create my own cute little monster!  I stitched my monster on 14 count plastic canvas with 2 mis-matched buttons for eyes.  I backed the finished piece with felt and added a black satin ribbon for hanging.

I am happy to share the pattern as a freebie on my hobby site:
http://hobbyloco.com/patterns/mymonster.html

I had a bit of trouble finding a design for this month's theme.  I decided to post from a larger piece by Barbara Ana.  I think it would look great stitched as an ornament.  I think that wicked looking plant would be considered a monster! 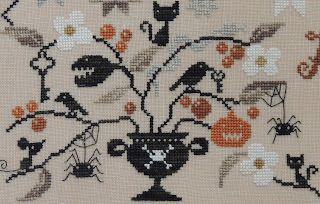 I'm looking forward to a fun pumpkin design for March!

... I was really struggling this month to choose a design but then I saw the very "sweet" Pumpkin Man stitched by my dear friend, Noni, for this SAL and I was hooked.

So, may I introduce you to a second Pumpkin Man? 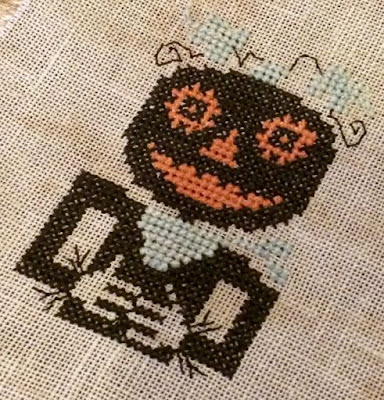 I am quite taken with him, thanks again, Noni, for the inspiration.

P.S. Of course, as this is a PS design - it counts as a finish for the Prairie Schooler SAL as well - yay! 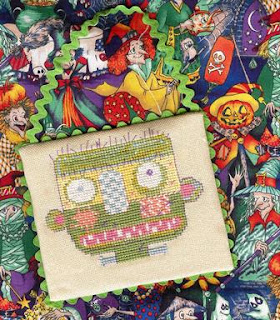 Thank you for looking!!!

It took me a while to figure out what to stitch for this theme.  "Frank" is from Trilogy's Eekology leaflet.  (I may have looked like him this am before I had my first coffee.) 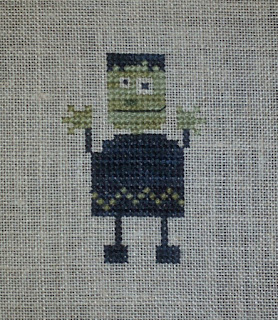 Email ThisBlogThis!Share to TwitterShare to FacebookShare to Pinterest
Labels: February 2016, Rita, The Trilogy

I have just been catching up on everyone's Jan and Feb posts... what wonderful designs you have all chosen to stitch.  It never ceases to amaze me how we all generally find something completely different to stitch for each month's theme :o)

January's theme was Winged Creatures (Crows, ravens etc) and I did have something planned until I saw the latest Snowflower Diaries SAL designs.... I just had to start January straight away and decided that it would be a "shoe-horned" choice for my January ornie! 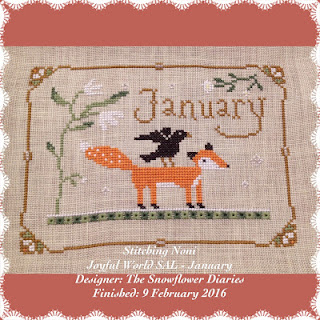 February's choice is definitely Halloween... and a monster.  Meet "Pumpkin Man" by The Prairie Schooler. 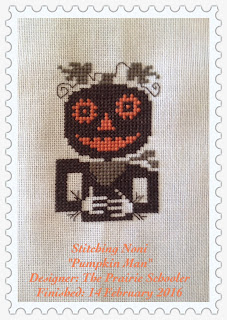 This cute monster was published in the Just Cross Stitch Halloween 2015 magazine and only took me a couple of days to stitch! Bonus :o)

See you next month

G is for Gargoyles, Ghosts and Gravestones - Revisited

G is for Gargoyle from A Dark Alphabet designed by Julie and Becky's Note of Friendship blog.

Gargoyles are essentially stone drainpipes designed to take the water fromthe roofs of medieval buildings away from the walls.  The name comes from the old French word "gargouille" meaning throat or gullet.  The stone masons liked to make their work as fanciful as possible and enjoyed carving the most grotesque gargoyles they possibly could.  Some were even made in the image of their bosses or disliked members of the clergy!!

They were also believed to keep evil spirits away from the churches and cathedrals by frightening them away.

Some of the most famous gargoyles are found on the Notre-Dame Cathedral in Paris, and here are some I met when I was there: 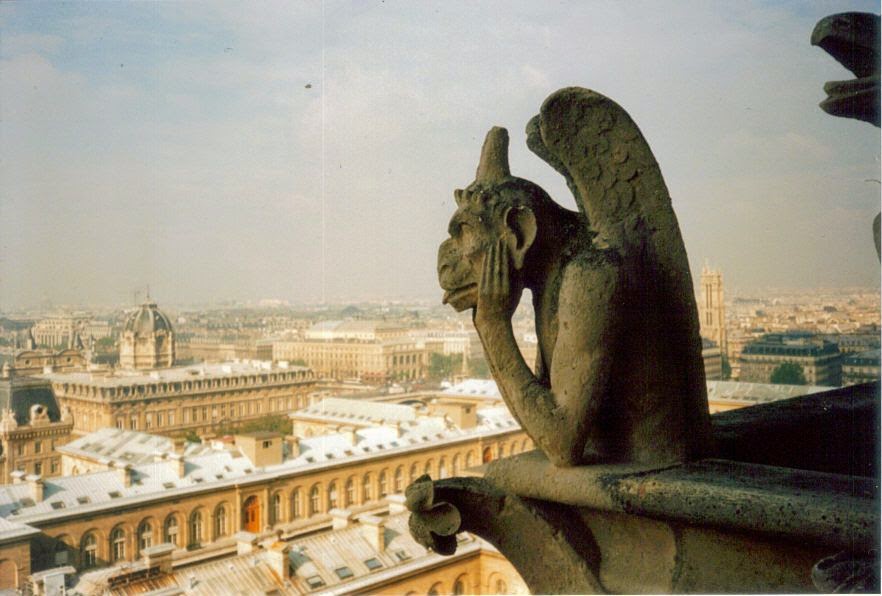 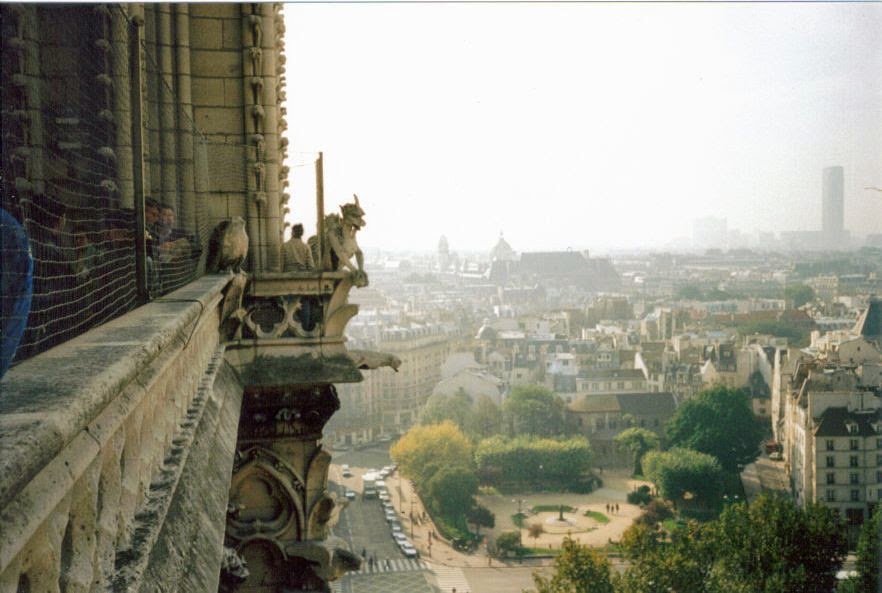 In the centre of the photo you can see the little park where we had our lunch after climbing up Notre-Dame.

This fellow would make a good door guard! 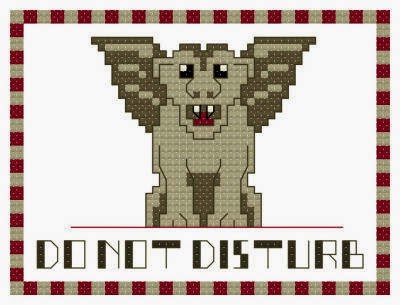 Our next G - Ghosts need no introduction!  Ghosts are one of the most popular cross stitch motifs for Hallowe'en.  Usually the cute and friendly variety like our own Mr Boo 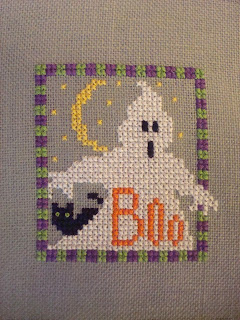 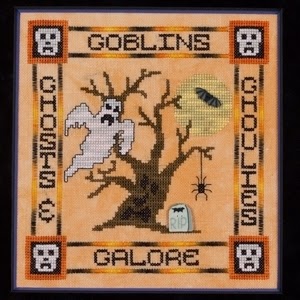 There are even Glow-in-the Dark Ghosties (another G!)

And the final G is for Gravestones.  I must confess, this is one symbol I am not so sure about stitching!  I don't know why.  I don't mind within a larger Haunted House picture but as a standalone stitch I am not interested.  Superstitious me.

Gravestones themselves started out as a mere pile of stones to protect the body from wild animals digging it up and to prevent the body from rising again!  They gradually evolved to become carved with the deceased's name and dates added then into the memorial stones we recognise today.  The Victorians were the masters of gravestone carving and their's were ornate and highly decorated with long verses dedicated to the person below.  Nowadays stones are not so much carved as etched with a laser.  The designs are often modern pictures with no religious significance, usually something connected with a sport or hobby. 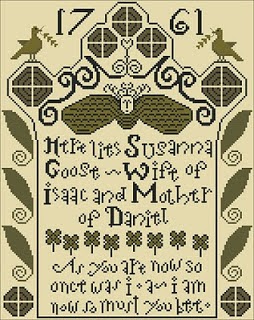 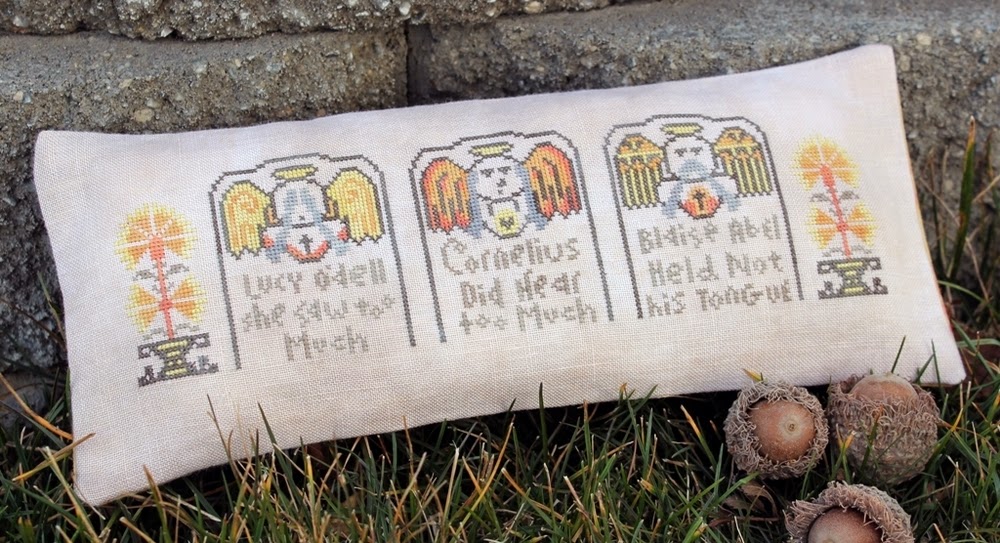 I love Tracy's designs and the blurb on this one intrigues me - You've seen the three monkeys in the classic "See no evil, hear no evil, speak no evil" pose. These tombstone angels make the same gestures, with the epitaphs letting us know the tomb's occupant made a fatal mistake. If you're familiar with your patron saints, you might notice the gentle folks' names were not randomly selected.

I must go Google those names now!!

Posted by Jo who can't think of a clever nickname 8 comments:

Here is my ornie for January, combining both the letter F and the winged theme...a Flock of Owls. :o)

The design is my own, and I stitched it on 18 count Aida painted with acrylic paint thinned with water. I haven't finished it yet, as I have room for 3 other ornies on the fabric before I cut it. 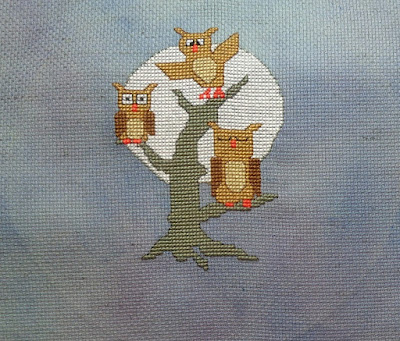 This month's theme is Mummies and Monsters.  It could be anything from Dr. Frankenstein's Monster to a scary thing with tentacles.  I have gone for the traditional bandaged-wrapped mummy.

For the blog this year I am stitching a Just Nan band sampler called Counting Bats.  Each band ties in with the theme for each month and by September I will have a completed sampler ready for framing for Hallowe'en!

Here is the whole thing so far: 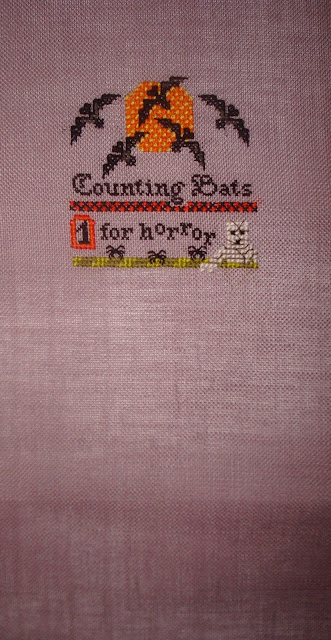 I am stitching it on a 32 count lilac linen using the recommended AVAS threads.

Posted by Jo who can't think of a clever nickname 10 comments:

Hi , Jo from Serendipitous Stitching invited me to be part of this blog.  I really appreciate all the work she has done to make it a success! Halloween is my favorite fun holiday!! When we moved here to Washington State, the mover said he had never moved so many Halloween decorations.  We moved in Sept.  Even though we lived in an apartment until we found a  house, I wanted my Halloween decorations left out so we could enjoy them.  I like to define my collection as fun, not real scary.  So it was very natural for me to join this blog.  My Jan. stitch is an owl for winged creatures. 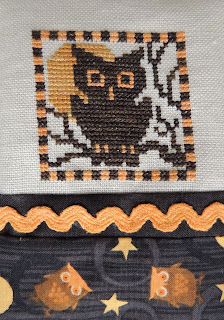 This design is from Prairie Schooler Book No.140 called Pumpkin Patch. When I saw this cute fabric, I knew I had to stitch an owl.  Thanks for joining me. I'm so happy to be part of this blog group.
Posted by Barb 9 comments: