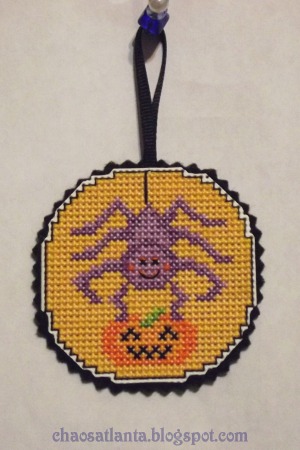 I chose this chart to stitch for December as it is just so darn cute!  I stitched it on 14 count plastic canvas and backed it with felt.  A quick and easy finish to end the year.

This is a real shoe-horn post.... I have finished off November's creepy tree finally... and added December's free choice and combined them to be a big hurdle finish on this design - "Dancing in the Moonlight" by Praiseworthy Stitches.

So here we are.... the creepy tree finished.... along with the raven, cat and resident ghosts!

I still need to add beads and a bit of back stitch but that will be done at the end when everything else is stitched.

Did you notice my lovely new needle minder?  Just perfect for Halloween stitching - a spider in his silvery blingy web!

Before I go though, I just want to say thank you to Jo for hosting such an awesome blog for all of us that love to stitch Halloween...  It has been great fun seeing all the great stitching over the year as well!

Til we meet again in 2016, have a wonderful Christmas and New Year!  See you all again soon! 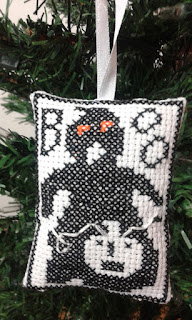 Remember the Blue Ribbon Design's Creepy Tree from November?  Well, I liked it so much I stitched all eight blocks and added another BRD to make a Box of Treats: 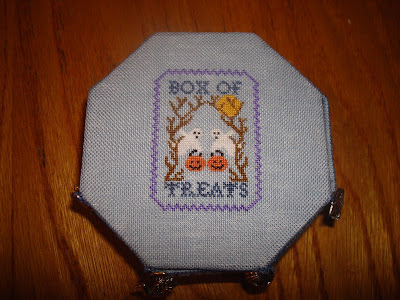 Here are the side views: 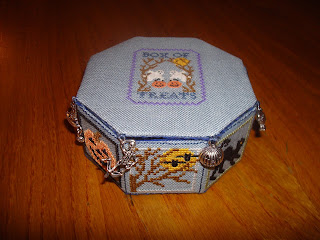 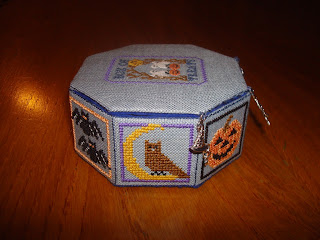 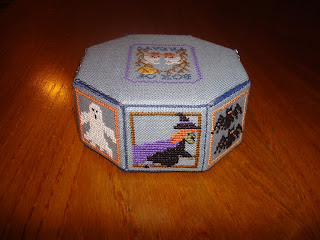 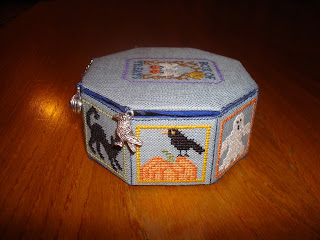 You can read all about it on my blog post here - Serendipitous Stitching
Posted by Jo who can't think of a clever nickname 2 comments:

E is for Eek, Eisoptrophobia, Ectoplasm and Enchantment - Revisited

E is for Eek from A Dark Alphabet designed by Julie and Becky's Note of Friendship blog.   There are lots of things in this picture to make you go "EEK!" from spiders to ghosts and bats.

One friend of mine was told that to keep spiders away you should place a conker in each corner of the room.  So every time we visited in the Autumn there were little piles of conkers all over the floor as the children wanted to play with them.

I found a great list of Hallowe'en related phobias while searching for Things That Make You Go EEK including this one:


Eisoptrophobia - fear of mirrors, or seeing oneself in a mirror

E is also for Ectoplasm -  a supernatural viscous substance that supposedly exudes from the body of a medium during a spiritualistic trance and forms the material for the manifestation of spirits. And when you have ghosts, who're you gonna call? 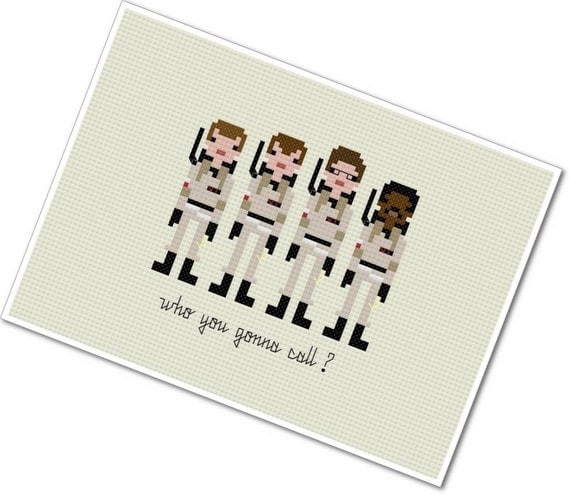 The final E is for Enchantment, the act of putting someone (or something under a spell).  Sometimes used as a curse (Sleeping Beauty's Enchanted Castle) or as a Love Spell, we also use the word to describe something which captivates our attention - "your stitching is enchanting!"

Teresa Wentzler has to be the Mistress of enchanting designs and here is one fittingly called The Enchanter:

Teresa has this to say about the design on her website:
This piece was designed in response to numerous requests for a "wizard". Since I am an avid reader of fantasy, inspiration for this project was certainly not lacking! The challenge, of course, was to come up with something original: ideally something that was a synthesis of my favorite impressions from all that I'd read and/or seen. I chose to show a young wizard (mage), perhaps an apprentice, studying and practicing his art. Exactly why I decided to show this aspect instead of a grander portrait of a wizard in full regalia doing something appropriately fantastical I'm not sure. Perhaps it's because I feel the process of "becoming" (growing in knowledge) is a journey that never truly ends....


And here is another Enchanted design -

Which designer enchants you most with their creations?

Posted by Jo who can't think of a clever nickname 2 comments:

I didn't finish the ornament I intended to have for this month but, I quickly stitched this tree. After seeing Jo's entry I remembered and added another ornament to my Behind the Gate project. 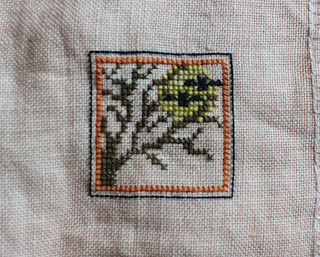 Behind the Gate
Blue Ribbon Designs