My creepy tree is from the JCS Halloween Collection. As stitched it looks like just an Autumn scene. The magazine model has two bat buttons in the upper corners. I will have to look around for something to adorn my ornament. 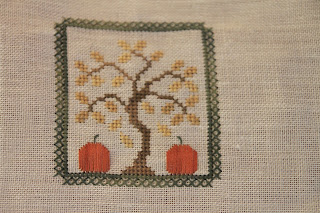 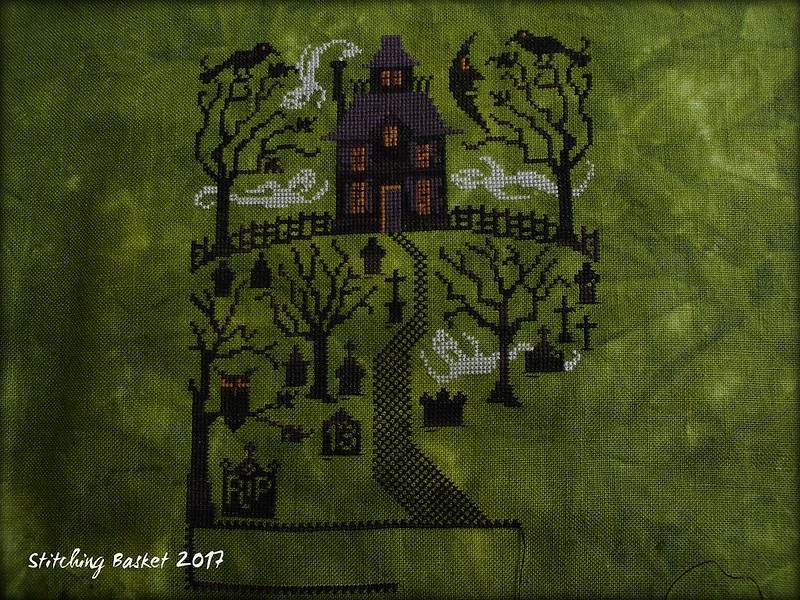 Hello!
My progress on this piece! 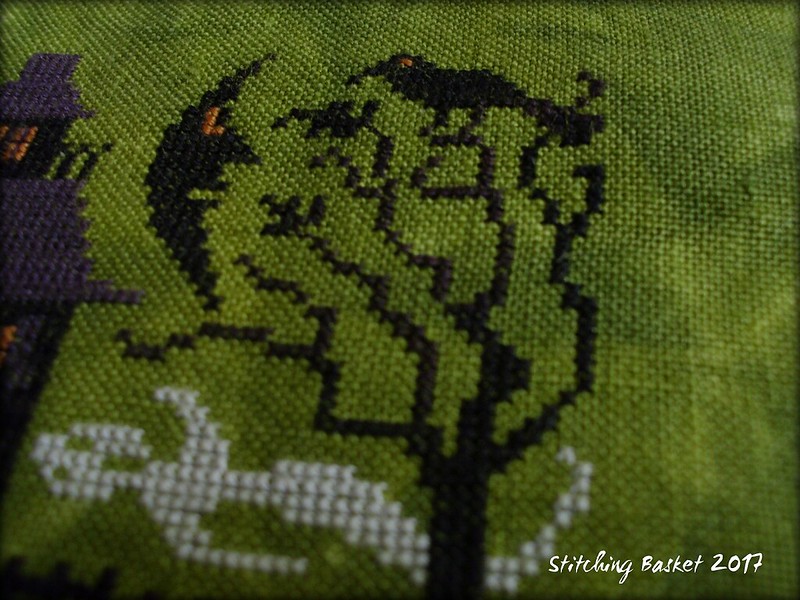 Because I love black crows and black cats! 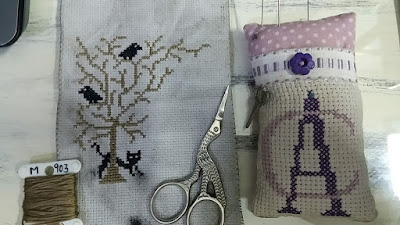 Part of Haunted Holler, by The Sticherhood.

I've now completed the main letters on both Happy Hallowe'en by Imaginating and Witches by Oberlin Samplers in readiness for Spooky Words in September!

Here are my Creepy Trees which form the H of Hallowe'en: 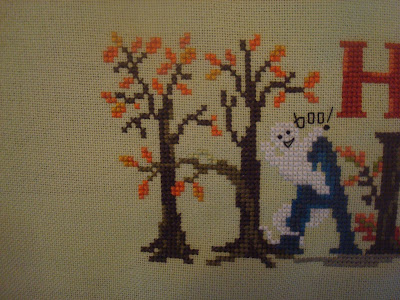 And here is the whole piece: 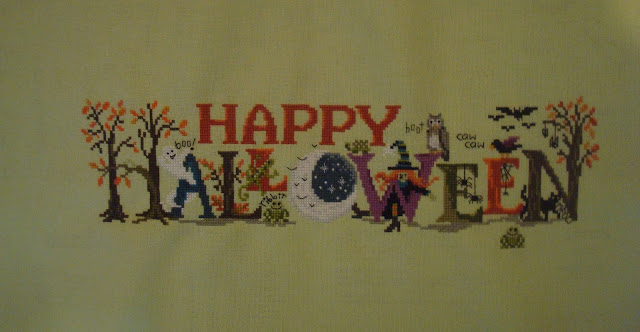 There weren't any trees on Witches but I wanted to get it ready for next month: 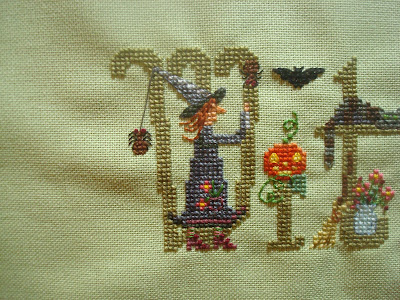 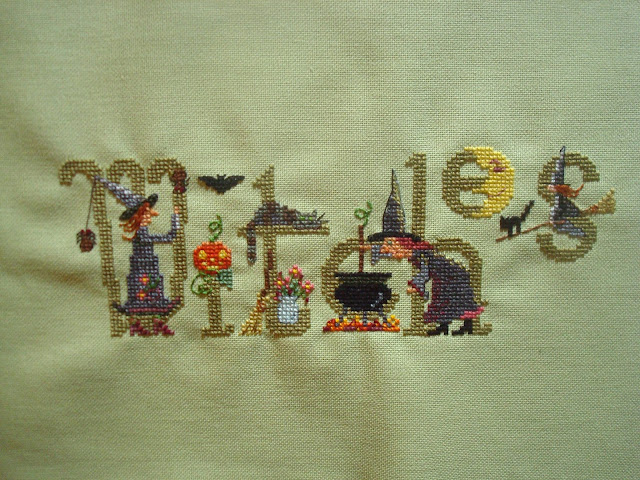 Posted by Jo who can't think of a clever nickname 4 comments:

Each month during 2017 I will be stitching on the design Halloween Happiness by Sandra Cozzolino / Imaginating.  I have picked a portion of the chart that fits with the themes with the aim to get it all fully stitched by the end of 2017!

Oh my goodness... I haven't posted here since April - are you serious!! I can not believe it! (Channelling my inner McEnroe!)

So without further ado, here is where my gorgeous Halloween Happiness is at now: 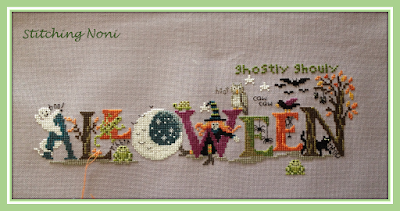 Hopefully I will be back on track with posting at the end of August!  But for now, happy spooky stitching!

All caught up! Jul/Aug for Anne S

Wow, I really got 'in the zone' this weekend with my stitching - I think I even surprised myself yesterday!!  Here are my choices for July and August. 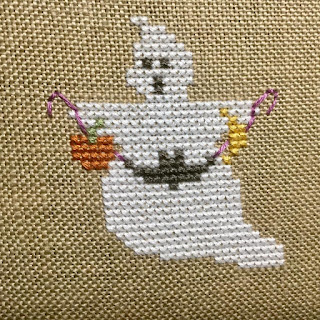 "Happy Halloween" by Simple Stitches (freebie)
Stitched on 32ct summer khaki (or dirty?) Belfast linen
with my own choice of DMC threads (similar to the charted GAST)


I once again went back to Prairie Schooler's When Witches Go Riding to stitch the main tree - this is where I can see the colours are very different between the witch and the tree, so I guess I'll have to re-stitch the witch etc before I'm 100% happy with it. 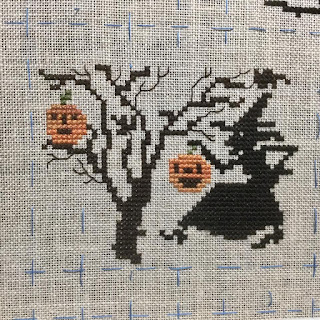 I've been pretty useless keeping up with my SALs again this year - gee, what a surprise!  Eventually, though, I do put needle to fabric and do a bit catch-up session.  That's what I've been doing this weekend, starting to catch up on our Hallowe'en SAL.


For the black cats theme, I continued working on Prairie Schooler's 'When Witches Go Riding'. Unfortunately I'm chewing through the Crescent Colours Blackbird thread way more quickly than expected, and I only have one skein left, which isn't enough to do all the dark areas ... so I opted to use DMC 3371 instead for the top banner and the borders. Also unfortunately, the colour is very different to the Blackbird thread, which leaves me in a quandary ... whether I should unpick all the other three elements I've stitched and re-do them all again in DMC 3371.  If I do end up doing that, it'll be at the end of the year, I think. You can't even tell that the dark thread is an overdyed thread, so in hindsight I should have just used 3371 in the first place ... but that's the thing with hindsight, it only seems a good idea after you've already put the effort in! ;) 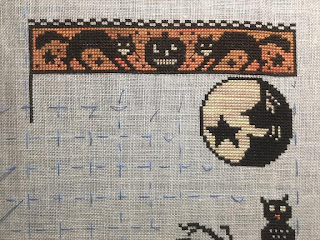 
Oh my goodness, it took me a very long time to decide on what to stitch for this theme. As it turns out I'd made my decision, but when I was in my stitching room I spied a totally different design, and ended up stitching that one instead.  This was my chosen project, and I have to say I really love it! The colours are a lot deeper/brighter in real life, though. 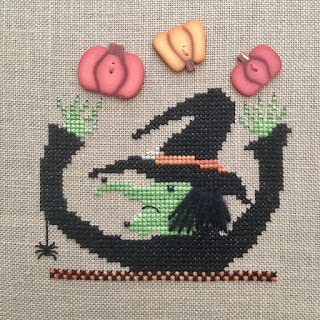 "Jack o' Juggle Spell" by Cathy Dean for The Victoria Sampler
Stitched on 32ct summer khaki (or dirty, I can't remember) Belfast linen
Stitched with recommended threads, with the exception of replacing Kreinik #4 braid 010HL with 011HL. I also subbed the black beads with ones I had in my stash, and added two extra legs on the dangling spider.

Next up is July, and another theme with lots of project choices, but I'm opting for a very quick stitch option to help me catch-up. With any luck it won't be long before that one is sitting in the finishing pile, as I fully intend to start stitching that one tonight :)  Then I'll be all caught up, and it'll be back to When Witches Go Riding for August's theme of 'Creepy Trees'.

A good excuse to stitch this design that I've always loved. 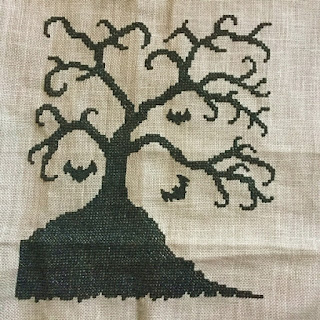 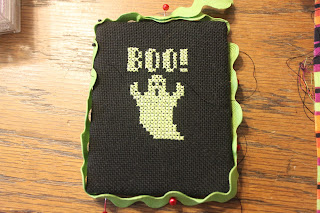 After some trial and error, I finally came up with a pattern to stitch for this month's theme.
My ghost is a freebie from Hobby Loco. More about the selection process and my finishing plans on my blog.
I stitched him with Kreinik #8 054F.
And yes,he glows it the dark! 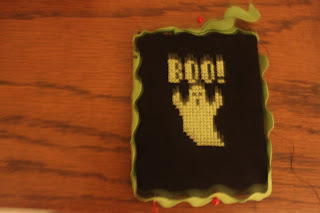 (slightly out of focus, will try later for a better picture)